Paul Kopeikin is Moving On 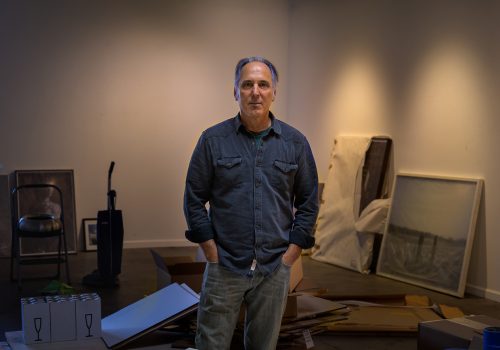 Interview and photos by Andy Romanoff

For almost thirty years Paul Kopeikin has been a mainstay of the Los Angeles gallery scene, and now he’s moving on. When I heard he was closing his gallery I wondered what had brought him to this moment and what he had learned from the years. I asked him if he was willing to talk with me about it and he was, so I went over for this interview. In our conversation Paul was frank and candid about his career, a luxury most business people can’t afford. If you have a gallery or dream about having one, or you dream as an artist of showing in one, this is a conversation worth thinking about.

AR – So Paul, what brought you to this moment?

PK – Well in part it was because I think if I had talked to a business manager from day one, they might have said “Why are you doing this?” There were good years before 2008; the business was growing and I kept moving into bigger and better spaces, but after ‘08 there were some years when I couldn’t pay myself. Even though by 2012 I could pay myself again and in 2016 and 2017 I had some really big sales, that just masked the fact that I wasn’t selling things from each exhibition – so shows were not covering the monthly costs, and while this isn’t unusual among galleries, it’s not sustainable in the long run.

AR – (At this point we were interrupted by people who came in to pick up a print, which brought up the problems of keeping unsold art, the space he had to devote to it and the costs of years of storage.) I asked “Is there too much art in the world?”

PK – No, there’s not enough people collecting it! I say this all the time. There are not too many artists but there are not enough buyers on any level, not enough people shopping even for prints you can have for a hundred bucks. The art world did that to itself because the art world is so obsessed with the high end. It’s a microcosm for the modern economy: everything is about the one percent. The only thing anybody cares about is the blue chip or what’s hot.

AR – So why now, why are you leaving at this exact moment?

PK – For one thing, Culver City is changing. Galleries are moving out and no new galleries are moving in. Both of my neighbors moved out recently leaving me alone on a little ‘island” on the wrong side of the river and that got me to thinking seriously about making a move. When I started looking for a cheaper alternative, I considered a couple of currently empty galleries where I could just move in and a couple of others where I would have to build out which I have done several times and was not excited to do again. Nothing felt like the right move, while all my previous moves have happened easily. So in the end I decided that what felt right was going private and working out of my home.

A second reason is that while my overhead is not expensive compared to other galleries, it is draining, especially during slow months. You know, you can’t help an artist’s career if all you’re doing is treading water and worrying about not drowning yourself. I’m proud of the fact that I always paid my rent and my artists but I started to see it could get more difficult going forward. Also, I started to see my mind wasn’t in the game anymore. I think that’s true for a lot of people who have been doing this for as long as I have. I look at the younger artists and dealers and I see how much more energy they have. I know how important it is to mix personal and business relationships—to be going out to the parties with the artists and the collectors. That’s a whole side of things I used to enjoy, but now I often prefer to go home.

AR – Do you feel this is the business you started in or has it changed in some fundamental way?

PK – The first decade of my career I made a living selling mostly black and white landscapes for five hundred to fifteen hundred dollars. In those days, fifty or so people would come to the gallery every day, on a Saturday maybe a hundred, but over time that’s changed.

There’s also a circle of life thing that happens. I know some young galleries that are doing very well, but I pride myself on knowing what part of the circle I’m in and acting accordingly. I’m going to continue working with the artists that I already had a relationship with, but it was growing more difficult to get the new artists I wanted. In many cases new photographers, let alone painters, don’t want to be in what is perceived as a photography gallery regardless that I had showed a variety of art over the years.   And I don’t necessarily blame them. There isn’t a lot of exciting work being done in photography right now, and the photographers who are making exciting work are quickly identified and absorbed into the art world.

Also, over the years, ego played less of a part in my wanting to have a gallery. I realized it was no longer about having the best gallery, whatever that means, or about how my gallery was perceived. I found myself caring less about business and more about what kind of a life I wanted to have. So as I looked at other spaces last summer, when none of them felt right, I came to understand that it was time to change. I realized I could continue working with artists and collectors on my terms; without an office, not even one at home. The way I’m thinking about it I don’t even want to have a desk in my home with a bunch of stuff on it. I just want a laptop and maybe a printer in a closet if I need one. I’ve told this to all my artists and they have been very supportive, “If you can find a better situation out there I’ll help you to get that, but until that happens let’s continue as we have and see what I can do in this new role.” In some cases I think I may be able to do more. Not being stuck with the gallery, perhaps I can be more strategic with artists and have more time to contact the museums, etc. It used to be you couldn’t get into an art fair if you didn’t have a gallery but that’s not so any more. The one thing that’s never changed is that if you have the artists that people want, you’ll sell them, and museums will come after you, and it will all work out.

AR – In thirty years, you’ve seen a lot. Do you have any advice for a gallery owner starting out today?

PK – Yes, keep it light! Do a show with an artist, keep the work for a reasonable amount of time, but then if the work doesn’t sell send it back to the artist. Don’t accumulate thirty years of stuff and then have to worry about what you’re going to do with it all. One of the best things about doing this now is that if I get hit by a bus tomorrow I’m not leaving a horrible situation for my daughter to deal with.

AR – One last thing, do you have anything to say to up and coming photographers?

PK – Not to be too melodramatic, but unless you are the kind of artist who has no choice but to make art every day just as you eat and breathe you are probably not going to make a career of it in the 1% art world. You’ll spend your life banging your head against a wall and watch others for whom it seems easy. That doesn’t mean you should stop making art, just that your reasons for doing it need to change. The art world, as you know it from art school, doesn’t need you, and you don’t need it. Make art for yourself, for those you love, and if you want to find a place to sell it, go ahead. But don’t assume there is only one path and that there is something wrong if you don’t find that path or it doesn’t find you. Make art and be happy. Be happy most of all.