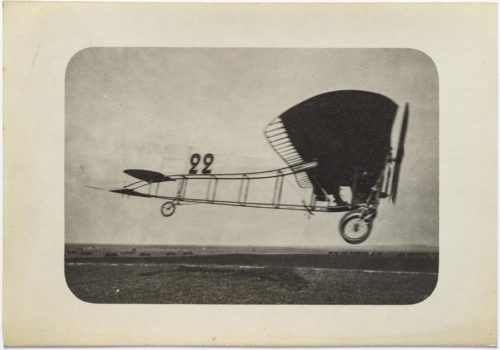 On Friday March 19, Paris auctioneer Oget-Blanchet will propose, at the beginning of the Modern Art sale, lots 18-77, a recently found archive of vintage silver prints, bringing to light a name not well known: Lucien Loth.

August 1909, “In Reims*, there is a feverish activity. The city had never known such agitation since the coronation of Charles VII by Joan of Arc five centuries earlier. Hundreds of hectares of wheat fields on the Bétheny Plain had been cleared to build an “Aéropolis” – a huge complex of hangars, stands and lawns for the public along a rectangular 10-kilometer runway…”

“There are hairdressers, nail and beauty salons, florists, post offices connected by direct telephone and telegraph lines to the main European capitals and a huge 600-seat terrace restaurant where, between the events, spectators could quench their thirst with champagne while listening to gypsy violinists…”

“A system of signage almost as well studied as that of a fleet in the field allowed to follow the progress of the events; banners hoisted to masts indicated the flight conditions, square, round or diamond-shaped signs indicated the events in progress; signs displayed the names of the pilots, and signaled to the public abandonment and accidents.

– The sky is black with aeroplanes, reports the Daily Mail correspondent with a mixture of admiration and awe. – They twirl, turn, take a nosedive, disappear and return with mad speed and grace. They offer a spectacle such as we have never seen in the history of the world…”

“Curtiss’ victory in the first Gordon-Bennett Cup (by six seconds over Bleriot) marked the culmination of a decisive week for aviation in which, for the first time, the world’s best pilots and the world’s best aircraft competed against each other… the meeting did justice to the preconceived notion that the airplane was merely an experimental vehicle with an uncertain future. David Lloyd George, future Prime Minister of Great Britain, declared from Reims: “Flying machines are no longer toys and dreams; they have become a reality.”

They have also become a photographic reality, and photographers will henceforth participate in this aspiration for modernity that they share with the artists of their generation.

If the names of Branger and the Rol Agency are very familiar to amateurs, it is the name of Lucien Loth, then a young operator from Reims, that should now be added to the list of the pioneers of aeronautical photography, thanks to the discovery of a set of some 200  prints in the Reims area, covering the first two meetings in Reims in 1909 and 1910.

The presence of a red stamp on the back of about twenty prints, the analysis of the papers and inscriptions in the negatives, the comparison with the prints of the Roland Branger agencies, sixteen of which are present in the archive (lots 18-23), the identification of a few views published as phototypes (postcards, lot 24), have allowed us to attribute most of the prints proposed here to him.

The arguments provided by the material analysis of the photographs were completed by the observation of constants in the way of shooting, in the photographer’s choices, favouring perspectives and abstract lines to the detriment of precision and documentary information. Thus, when seeing Lot 29, how could one not evoke Lartigue’s car at full speed?

Perhaps encouraged by his first attempts in 1909, Lucien Loth became a professional photographer in 1910. The early battles of WWI in 1914 destroyed most of Reims and his studio. With two exceptions (two doubles), each of Lucien Loth’s prints recently unearthed can be considered unique.