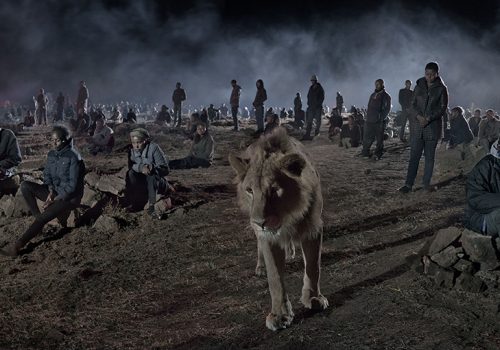 Contemporary British photographer Nick Brandt feels so passionately about the destruction of the African environment and the threat to both humans and animals, that he changed the whole way he works in order to realise his vision for This Empty World, his new body of work published by Thames and Hudson in February 2019, coinciding with exhibitions in London, New York and Los Angeles.

Previoiusly, Brandt had always worked in analogue black and white but this project demanded something very different. “I immediately imagined the photographs at night, with the unnatural, often garish and sickly colours of the modern human world. That was it. I would have to work in colour for the first time. No choice in the matter. Furthermore, if I was going to photograph in colour, then I wanted to embrace it… to use the colours as expressively as possible. As for switching from film to digital… there was no choice in the matter. I was simultaneously excited and scared.”

Confrontational and direct, Brandt’s images are akin to cinematic fragments of a contemporary dystopian story in which men and animals – elephants, lions, jackals, hyenas, giraffes, rhinos, antelopes, elands and zebra – share the same fate. “The damnation of animal life, the debasement of human life, the destructive connection between the two – it’s not just the animals who are the victims of environmental devastation, but also the humans now inhabiting these landscapes,” says Nick Brandt.

His epic photographs – conceived first as large-scale prints – explicitly reference mid- 19th century history painting, such as the work of Eugène Delacroix and Francisco Goya. Petrol Station with Elephant and Kids (2018) echoes the composition of Gustave Doré’s biblical scene The Dove Sent Forth from the Ark (Genesis 8:11) (1866). Both also share similar narratives in which human and animal are mutual victims of environmental disasters, an idea explicitly set out in Brandt’s ‘Elephant & Human Family’ (2018).

This Empty World was created on Maasai community lands in Kenya and Brandt’s photographs conceal a painstaking process carried out on a massive scale there. Each image combines two moments in time captured weeks apart, almost always from the same camera position. First, a partial set was built and lit, and a camera fixed in place with motion sensors. After the animals entered the frame and were captured on camera, the sets were completed and populated with a human cast drawn from local communities and beyond. Brandt interwove the two images in post-production, bringing out the chiaroscuro and detail. At the end of the project, the elements of each set were recycled and the land returned to its original state.

Nick Brandt says of the work: “This Empty World addresses the escalating destruction of the African natural world at the hands of humans, showing a world where, overwhelmed by runaway development, there is no longer space for animals to survive. The people in the photos are also often helplessly swept along by the relentless tide of ‘progress’. They are never portrayed as the aggressors, because they’re not. Environmental degradation will almost always affect poor rural people the most, due to the exhausted natural resources upon which they rely. The real villains – the majority of politicians, industrialists and their largely self-serving kind – are all off camera.”

Nick Brandt: This Empty World. Includes reproductions of the series and new essays by the artist.