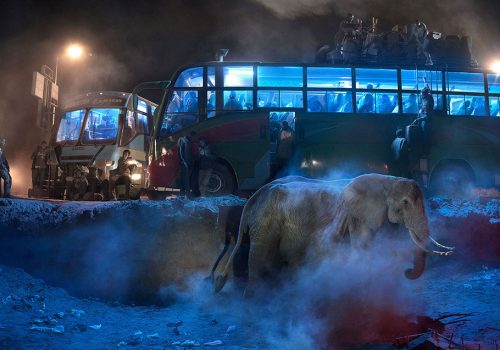 Nick Brandt is back! He reoffends, goes back to battle, always and again, for 20 years. Armed with his medium format camera, he leads his ecological war against poachers and those who kill animals. This struggle, he leads with his art and with his foundation: Big Life Foundation.

He does not let anything in this fight, he comes back to the fore, with as much creativity but today with a good risk since he leaves his black & white slightly sepia and committed to color. A statement that brings him even closer to reality as he creates impossible images.

His great trilogy from 2001 to 2012 “On This Earth” – “A Shadow Falls” – “On The Ravaged Land” has made it known worldwide (note: the 3 titles can and must be read after!). It showed the great beauty of East African fauna, but also the arrival of dark clouds on the African ecosystem, sign of the exponential disappearance of lions, elephants and other giraffes.

The second series “Inherit The Dust”, on the edge of land art, was a technical and photographic feat. He installed in situ gigantic prints (more than 5m high …) representing the animals. This allowed wild beasts to regain possession of their territory, their environment of origin colonized and destroyed by man. Magical, beautiful, but of extreme hardness.

For his third series “This Empty World”, Nick Brandt goes even further. Accompanied by a production worthy of a Hollywood studio, he managed to mix men & animals but this time the animals are not present on huge draws, they are there, in real life. This work, for the first time in digital and in color, shows us both the possibility and the impossibility for the animal to live with the man.

This “Empty World” according to Brandt, addresses the vertiginous destruction of nature by the hands of man, showing a world where, overwhelmed by uncontrolled development, there is more space for the survival of animals. The people in the photos are often driven, helpless, by the incessant wave of “progress”.

Each image is a combination of two moments in time, captured weeks apart, from the same locked position of the camera.

Initially, a first part of the decor is built and lit (construction sites, bridges and highways, gas station, bus station, etc.). In the following weeks or months, the animals that inhabit the area become comfortable enough to enter the setting.

Once the animals are captured in Nick Brandt’s camera, all the sets are finalized by the artistic team. A second sequence is then photographed with the complete set and characters from local communities. Large-scale final impressions are a composite of two elements: shooting with animals + shooting with men.

We know that African animals are murdered by hunters hungry for skin, ivory or blood. But they are also exterminated by the ever-increasing number of human populations who occupy their living space. Brandt’s message has been the same for 20 years: stop the massacre. By showing us the beauty of animals, then the ravages of man on their habitat and finally the empty eyes of humans confronted with animals, he is constantly trying to awaken people’s consciences. Today, they are! We must act now.

As the human population increases, so does the need for natural resources. By plundering these resources, man destroys his own habitat and that of animals. It is time to take action to bring down this population.

Note 1: Images were all photographed on land of the local Maasai community, without protected reserve status, near Amboseli National Park in Kenya.

Note 2: Once the sets have been removed and all their elements recycled with virtually no loss, there is no record of filming in the landscape.

Presented by Waddington Custot in association with Atlas Gallery

Includes reproductions of the series and new essays