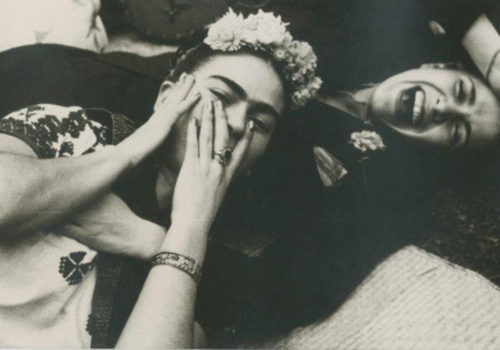 Throckmorton Fine Art presents “Mirror Mirror….Frida Kahlo Photographs” featuring more than thirty rare and vintage photographs of the Mexican artist by twenty photographers of the 20th century, from May 21 to September 12, 2015.

The Throckmorton show is being staged to coincide with a comprehensive series of events at the NEW YORK BOTANICAL GARDEN, also beginning in May, that includes a show of Frida Kahlo (1907-1954) paintings and works on paper, curated by art historian Adriana Zavala, that highlights Kahlo’s intense interest in the natural world and botanicals.

Dr. Salomon Grimberg, M.D., one of the leading experts on the life and work of Frida Kahlo, is writing the catalog essay for this show. He will give a talk at the Throckmorton Fine Art gallery titled, “Frida saw herself in a photograph before discovering mirrors…” on Saturday, May 30th at 3pm.

He says, “Frida Kahlo’s father was a photographer, and as a girl, she saw her looks in his photographs of her before she discovered mirrors, which became the inseparable companions that provided her with a sense of self.

“As much, if not more than any movie star in Mexico, Kahlo was photographed and her photos nurtured the limelight around her. During her first trip to the United States, she was photographed by Lucienne Bloch, Imogene Cunningham, Peter Juley, Martin Munkacsi, Nickolas Muray, Carl van Vechten, and Edward Weston; and the list grew. In Mexico, she posed for Lola Alvarez Bravo, Miguel Alvarez Bravo, Miguel Covarrubias, Gisele Freund, Hector Garcia, Antonio Kahlo, and Berenice Kolko, among others. She was also photographed by Andre Breton and Dora Maar. Lola Alvarez Bravo claimed Kahlo was sought after by photographers because of her aesthetic allure. Today, those same photographs, which drew the public with her magic, continue seducing others. Kahlo and her exotic beauty are part of the universal conscious and everyone was a part of that.  There is the right photograph for the right Frida adorateur.”

Spencer Throckmorton says, “Frida Kahlo’s life and art has inspired the world for decades.  In many ways she was a champion at overcoming a life of personal tragedy and disappointment. Many of her paintings are self-portraits which enable us to see just how she used her talents to portray her experiences handling challenges that might have consumed those with less determination. Her ability to rise above so many obstacles has left an indelible mark, and is perhaps her greatest achievement.

“The photographers we have chosen to feature in our Frida Kahlo show each seem to have been expert at capturing Kahlo’s life, particularly the solace she found within the walls of the gardens at La Casa Azul.  We have loaned several of our photographs of Frida to THE NEW YORK BOTANICAL GARDEN for their show, and the ones we are presenting in our gallery similarly express the respite Kahlo experienced in the safe and beautiful environs of La Casa Azul.”

Among the 20 acclaimed photographers whose images of Frida Kahlo are featured in the Throckmorton “Mirror Mirror….Frida Kahlo Photographs” show are five works by the great German-born photographer Gisele Freund (1908-2000) taken during a two year period beginning in 1950 when Freund was immersed in Mexican culture and spent a good deal of time at Kahlo and Diego Rivera’s home. Freund won many honors including the French Chevalier de la Legion d’honneur in 1983. Her powerful images of Kahlo are a testament to Kahlo’s strength and endurance during incredibly trying times — they are among the last before her death in 1954.

In a new book, FRIDA KAHLO The Gisele Freund Photographs, published by Abrams with texts by Kahlo’s biographer Gérard de Cortanze and art historian Lorraine Audric, there are 100 rare images of Kahlo and unpublished commentary by Freund, who came to know Kahlo and Rivera as a fiercely passionate and irascible couple, witnessing their domestic life the way few had. Kahlo’s health was deteriorating at the time, and she was often in pain, largely a result of a tragic 1926 accident when a bus she was riding in collided with a tram, leaving the teenage Kahlo with a crushed spine and right leg, among many injuries.

Kahlo’s career as a painter was borne as a result of her injuries, as she had previously planned on becoming a doctor. She endured countless surgeries throughout her life, spent much time in bed or in a wheelchair, and suffered debilitating periods of intense pain complicated by the habit-inducing drugs she was given.  Her German-born father and Mexican mother had raised her at La Casa Azul and her studio and gardens there were where she sought refuge and inspiration throughout her life, which ended before her 47th birthday.

Many 20th century photographic legends shot images of Frida Kahlo and Casa Azul throughout her life.  Spencer Throckmorton has selected three vintage photographs taken at Casa Azul  by the acclaimed photographer Graciela Iturbide, whose photographs have frequently been exhibited at Throckmorton Fine Art. She photographed Frida’s sealed room there after it was opened.

He says, “I am thrilled that Graciela Iturbide’s photographs of Frida’s home will be on view.  Graciela was honored with The Cornell Capa Lifetime Achievement Award on April 30th at the 31st Annual Infinity Awards ceremony of the International Center of Photography here in New York.  It is a wonderful tribute to her talents.”

Highlights of the show of Frida Kahlo photographs include Gisele Freund’s “Frida Feeding Ducks,” “Frida in Garden” with ducks and dogs, and 1951’s “Frida in Garden Casa Azul;” three images by Nickolas Muray including a 1939 gelatin silver print of “Frida with Deer,” “Frida Kahlo and Chavela Vargas,” from 1945, and “Frida Kahlo Painting Two Fridas” dating to 1939, a gelatin silver print portraying the artist in front of her own self-portrait.  Throckmorton is also showing an anonymous portrait of “Frida Kahlo Resting” from 1943, Dora Maar’s 1938-9 image “Frida at Andre Breton, Paris,” Juan Guzman’s 1942 image of Diego Rivera with Walt Disney and another anonymous image “Frida Kahlo braiding Rosa Cavarrubias” dating to 1940.