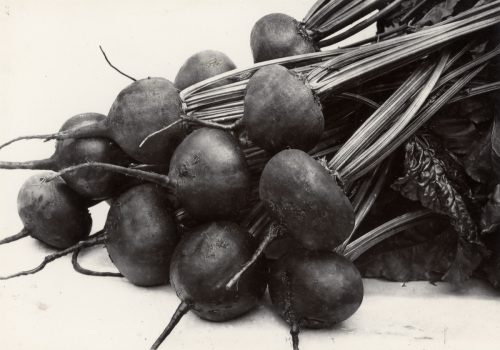 Presenting the works of two photographers of the early 20th century, the Miranda Gallery (Paris) and the Michael Hoppen Gallery (London) pay tribute to the beauty of nature, a theme at the heart of today’s questionnings.

Charles Jones (1866-1959, England) was an English gardener who grew fruit, vegetables and garden flowers in a large private estate in Lincolnshire. Jones was also, secretly, a passionate photographer and a talented printer who throughout his life documented his work. His prints were only discovered in 1981 by Sean Sexton, art historian and collector of photographs, who, at a flea market in London, bought a trunk filled with his unique prints. Jones photographed his subjects on a very neutral background, raising them to the rank of portrait in anticipation of the refined, documentary and rigorous style that will be adopted some thirty years later by the modernists – Edwards Weston, August Kotzsch, Joseph Sudek – and then by Bernd and Hilla Becher. Endowed with an innate sense of composition, Charles Jones printed from glass plate negatives, taking silver-toned gold photographs; its fruits and vegetables glow softly, as if they still carried the heat of the sun on their skin.

The Miranda Gallery will display a selection of unique period prints from the late 19th century. Vegetables will be in the spotlight: peas, celery, squash, beets, cucumbers …

Karl Blossfeldt (1865-1932, Germany) studied sculpture before working in a foundry where the leaves already inspired him to decorate his productions. Enrolled at the art school in Berlin, he undertook, from 1890 to 1896, a study of local common plants, intended to serve as a reference for ornamentation, but the project revealed above all his talent and passion for photography. Karl Blossfeldt’s photographs are of a very modern nature today and at the time of their publication in his two major books: Urformen der Kunst (‘Original forms of art’) 1929 and Wundergarten der Natur (‘The enchanted garden of nature’), 1932. It is undoubtedly the technical mastery he developed, born of his invention of a macrophotographic camera that makes Blossfeldt’s work so exquisite: the close-ups reveal the unsuspected forms and symmetries of plants. Blossfeldt conceived of his work as an educational tool and an inspiration for artists, sculptors and architects. The study of natural forms seemed to him indispensable for the future of contemporary art. Miranda Gallery will present first edition photogravures of plants and flowers.