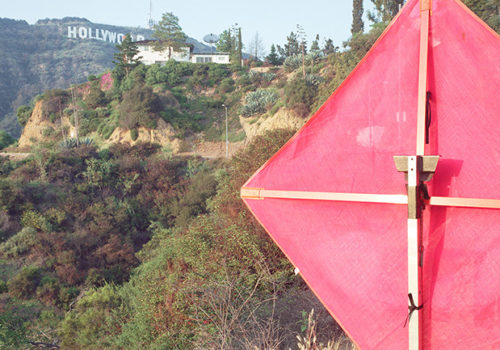 “Cruising Mulholland, you take it all in, rugged mountains rising up from the sea, mansions perched on hilltops, giant succulents like saxophones, and the vast grid of the city spread out below.” Karen Halverson

American photographer Karen Halverson fell in love with Mulholland in 1988 at the Metropolitan Museum of Art in New York. There she saw David Hockney’s exuberant painting, “Mulholland Drive: The Road to the Studio.” Halverson moved to Los Angeles a few years later, and soon discovered the real-life Mulholland, the iconic road that runs along the crest of the Santa Monica Mountains, bisecting the city.   She had long been engaged in photographing the landscape of the American West. But Mulholland offered up something unique, a dramatic physical landscape in the heart of a major metropolitan area. She drove the voluptuous curves of the road countless times over the course of two years.

William Mulholland engineered a steady supply of water to naturally arid Los Angeles in 1913, thus enabling the development of the city we know today. The road bearing his name was built in 1924. Decades later, Roman Polanski’s “Chinatown”, and David Lynch’s “Mulholland Drive” made the Mulholland name a part of popular culture. But it’s the road that is dear to the hearts of Angelenos and of visitors from around the world.

Halverson’s new monograph, Mulholland, features forty-one of her vividly colored, panoramic photographs. Each image is presented as a double page spread, nearly two feet wide. The book’s image sequence takes you along on a thrilling fifty-two-mile drive from the Pacific Coast Highway to the famous Hollywood sign, from the arid natural landscape near the coast, to the built landscape of the Hollywood Hills.

The book includes a foreword by Los Angeles native, David Kipen, who highlights several distinct sections of Mulholland, from where it “first slithers up from the sea” to above Hollywood, where it lies “between worldliness and wilderness”.