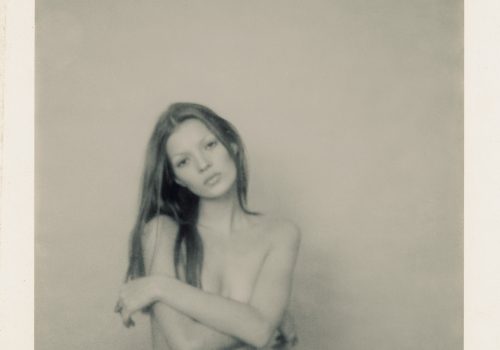 For the last London Fashion Week, Michel Haddi had organized a show in tribute to Kate Moss. He gave us the images as well as this very colorful text:

First meeting, Los Angeles on a shooting for the magazine Interview, she came to say hello, the actress that I was photographing Lolita Davidovitch, gave me a fit of jealousy, who knows why, the cute Kate was 18 years old fresh as a ray of spring and carefree, she asks me to sunbathe, I obliged, she walked around in underwear and bra, I did not have time to photograph her, but told myself ,the little one has something special ,,,,,, I kept the idea in mind of out of the way, I had to handle Lolita chapter closed.

1 year later in New York I had to carry out a campaign for the Bloomingdale’s stores across the United States film and photos, which says that life is not made of fortuitous coincidences, I am offered Kate, and 2 other star models, deep inside I laugh because I know what’s going to happen, the divine marquise without doing anything, will create a magical mess and sure enough, the other models see this little thing arriving, not very big,  working askew, pouting, like I don’t give a ,,,,, I go see her and whisper in her ear “my darling, I’m going to ask you a favor, keep going, don’t change, I adore, you are really my marquise (you understand, the marquise of the angels), the other models have a nervous breakdown because I do not give them enough camera love, I don’t care, I bet everything for this campaign on Kate’s little face, and I was not wrong the day of the broadcast Bloomingdale installed television screens in all the stores across the United States, we remade images for GQ afterwards and life is like that, we lost sight of each other, well too bad we never worked together again.