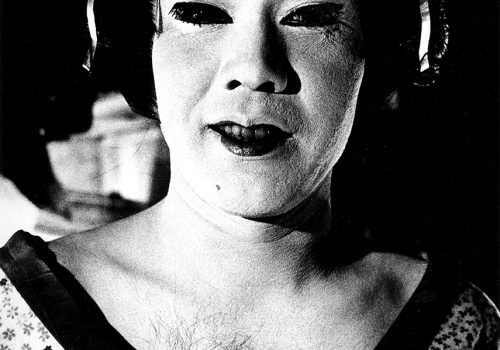 The MEP presents Moriyama – Tomatsu: Tokyo, the historical exhibition of the two masters of Japanese photography.

Moriyama – Tomatsu: Tokyo is a surviving historical exhibition, one planned while Shomei Tomatsu, both an inspiration and mentor to Daido Moriyama, was still alive, but which never took place. The MEP features more than 400 works, from the 1950s to the present day, of two of the most influential and essential photographers of our time. Each of them, in their own way, nurtured a true passion for the city of Tokyo and its people, and both have continued to work there throughout their lives. This exhibition is therefore presented as a double retrospective (the first devoted to Tomatsu in France to date) and one of the most important around Moriyama’s work for years. Each artist is dedicated an entire floor of the MEP, as part of this exhibition designed with Daido Moriyama and in collaboration with Yasuko Tomatsu, the widow of Shomei Tomatsu, which is a tribute to Japanese photography and to the largest metropolis in the world. Offering both small prints and large-scale installations, the Moriyama – Tomatsu: Tokyo exhibition offers two distinct and unforgettable visions of life in Tokyo.

For Shomei Tomatsu, adored, collected and presented around the world, Moriyama – Tomatsu: Tokyo represents the first major exhibition in Paris. As for Daido Moriyama, this is the most complete presentation of his work ever organized in France.

Conceived by Moriyama and Tomatsu themselves, the exhibition had never seen the light of day following the death in 2012 of Shomei Tomatsu. The MEP chooses today to realize this dream shared by the two friendly photographers. Through a wide panorama of their work, the Moriyama – Tomatsu: Tokyo exhibition highlights their fascination with the Japanese capital, which they have walked for decades.

Conceived in close collaboration with Daido Moriyama and Shomei Tomatsu’s widow, Yasuko Tomatsu, the exhibition takes up the initial selection of the two artists, enriched and adapted for the occasion, and offers a complete and coherent journey through their works.

Each photographer will occupy one of the two floors of the MEP galleries. With an essentially chronological connection, the first part, devoted to Tomatsu, will contrast with a more abundant and dense scenography of the section reserved for Moriyama.

From the images preselected for the initial project, 140 works by Tomatsu were selected for the exhibition at the MEP. The route will begin with the first photographs of the artist taken upon his arrival in Tokyo in 1954. Tomatsu then became interested in the proletariat in a country deeply damaged by the destruction of World War II: petty trades, the unemployed, street children. As early as 1958, fascinated by the Americanization of his country and its impact on the Japanese way of life and culture, he began to photograph the American soldiers who occupied military bases in Japan. This is the start of his “Chewing Gum & Chocolate” project.

Tomatsu was also interested in the new ways of life that gradually emerge in these post-war years. In the series “Chindon”, he fixed his gaze on the Chindownyassans, poor actors and musicians, who, dressed in their traditional costumes from the Edo period, become models of street advertising for department stores.

With the youth series “Asphalt”, Tomatsu experimented with form and opened  the way to worlds that no one had imagined: he devoted a whole series to the asphalt of the streets, which he sees as the “skin” of the city, on which the fragments of metallic objects embedded in the asphalt, resemble stardust.

The exhibition will also feature a large selection of photographs from one of his major books Oh! Shinjuku published in 1969, in which Tomatsu notably includes his series “Eros” and “Protest”. He tells the chronicle of this district of Tokyo, which retains an essential place in the mythology of the Japanese counter-culture. District of department stores where huge crowds meet on weekends, and whose nightlife, populated by marginalized young people, gives way to strip clubs and girly bars, which Tomatsu shows us without taboos.

The artist has been using color photography since the 1960s. This practice, which will be found throughout the exhibition, will take on more importance over the years. A few extracts from the series “Cherry Blossoms”, at the beginning of the 1980s, magnify the cherry blossoms of Japan, before the journey ends with the four astonishing portraits of the leading photographers of Japan at the end of the 1970s: Nobuyoshi Araki , Masahisa Fukase, Daido Moriyama – disguised as a Japanese bride – and the magnificent self-portrait of costumed Shomei Tomatsu.

Designed by the artist himself, in close collaboration with gallery owner Akio Nagasawa, the selection of works and the scenography of this second part, highlight the emblematic series and the great diversity of Daido Moriyama’s practices: silver prints, color photographs, serigraphs on canvas, Polaroid, Drop Paper, light boxes, books and magazines, in particular the Record magazine that Moriyama has published periodically since 2006 .

The journey begins with images from his first book, Japan: a Photo Theater (1968), where the artist mixes street photos and portraits of traveling actors. The book caused a scandal, its aesthetic is very close to the Provoke magazine that Moriyama joined in 1969.

That same year, he produced the series “Accident” (1969), in which he reclaimed photographs of nighttime and violent road accidents, found in magazines or captured on television screen. Moriyama diverts them in the manner of the serigraphs of the series “Death and Disaster” by Andy Warhol, which he discovered in 1968. The exhibition will also present a little further in the course, serigraphs on large format canvas, inspired by the practice of Andy Warhol which Moriyama considers a natural extension of his own photographic language.

A large selection of photographs from Farewell Photography (1972) one of the most avant-garde books of the time – will present a new photographic language for Moriyama, that of blur, shake, grain and spots, with images on the border of readability.

After a long break in his photographic practice, Moriyama published in 1982 the book Light and Shadow in which he imposed a new approach: this time with very contrasting images, omnipresent blacks and tight framing, which would make his reputation in the years that followed.

The exhibition then offers an immersed tour of the Shinjuku district – urban chaos which never ceases to subjugate Moriyama and which he photographs with instinct. There follows an installation around the series “Tights” in which the artist transforms the fishnet stockings into an obsessive motif declined on different supports.

Then the series “Platform” (1977) carried out over a day along the Zushi-Yokohama-Tokyo route, will present photographs of rows of anonymous people who gather on the platforms of a station to go to work, photos of crowds. in which the gaze focuses on each individual.

Finally, recently rediscovered in his archives, the “Pantomine” series (1963), will bring together photographs of fetuses stored in formalin, the first personal project that Moriyama carried out at 25 in a maternity hospital in Tokyo.

The end of the course will highlight color, Moriyama has also photographed the city of Tokyo extensively with  Polaroid, walking the streets, multiplying the sights, inhaling the smells of the city, scanning the alleys, billboards, posters, commercial stalls and pedestrians. The final room will present the series “Pretty Woman” a selection of color photos taken in 2017 on the streets of Tokyo, where he captures silhouettes of women in the chaos of the streets and shop windows.

The exhibition will end with a large selection of Record magazine, published by Akio Nagasawa, entirely designed and produced by Moriyama from his own photographs, and whose number 44 has just been published.