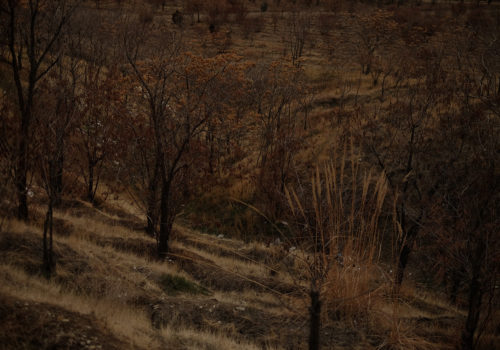 The Iranian photographer Mehrali Razaghmanesh completes a residency at the Cité des Arts in Paris. In the French capital, he was able to continue his research on plants. Another way to see the beauty of the city, notably by celebrating one of its trees, the weeping willows.

Mehrali Razaghmanesh considers plants as living beings. During a walk in the forest, he sometimes strokes them as one might do with a horse to touch its hair, in a lively and friendly gesture. He seems to have formed a special relationship with them.

In Tehran, for example, he went to an abandoned piece of land and photographed the incredible profusion of flora, the ochre and mauve colours, the dazzlingly splendid greens when they appear at dawn, in a cloud of mist or a touch of dew.

In his youth, the photographer lived in a town in northern Iran that was located near the Hyrcanian forests. This little-known expanse of trees, which stretches from southern Azerbaijan to the Iranian coast of the Caspian Sea, is one of the world’s oldest forests.

Mehrali Razaghmanesh felt a very special emotion when he regularly visited the area, sometimes sharing the lives of the shepherds who work there. He confides that he found a place inhabited, very full of presence and whose echo he was able to perceive, trying to magnify this experience in his work as a photographer.

When he came to Paris for a residency at the Cité des Arts in the autumn of 2021, he naturally turned to the city’s trees. He first explored all the parks of Paris, surveying Montsouris as well as Belleville, passing through the Tuileries as well as the Jardin du Luxembourg. He took portraits of certain plants. He first photographed them, then kept only the shape in black and white using digital retouching software, then covered each part of the image with coloured pencils.

The shades he uses are not always exactly the same as those we see on the trees of Paris. For a plane tree, he even allowed himself to make pink leaves.

A process that he continued in this series dedicated to the Weeping Willows. Fascinated by the beauty of the Seine, which passes under the windows of his studio in the Cité des Arts, he set out to make interesting encounters there, to study the trees that live on the sides of the river and to deepen the work he had begun in the parks.

Particularly intrigued by the indication I gave him of the weeping willow in the Square du Vert Galant when he asked me what type of tree lived on the banks of the Seine in Paris, he went to see it more closely. He then remembered the great beauty inherent to the Weeping Willow, of which there is nothing similar and which, in a way, is the most twisted of all trees.

“Black as the wood of the gallows”, says Victor Hugo, who portrays it in his poem Comedy in the Leaves and suggests that nature has done well to leave a place for this “old man who has no more hair”. The very word “weeping willow”, when we go back to its etymological roots, could literally mean: “He who spits out tears”. This name was probably coined because of its low falling branches, which sometimes reach into the water, or because drops of water from condensation can drip from its leaves.

Mehrali Razaghmanesh went in search of the trees and counted seven of them along the Seine. Using his process of covering the canvas of a plant from a first photograph with coloured pencils, he has produced a portrait of these particular trees, those that live closest to the banks of the capital’s river whose presence is strange, intriguing. Mehrali Razaghmanesh has tried to marry autumn colours with spring colours, making the shade of these Willows improbable, but ultimately the shade they could have if we decided to see them with all the seasons mixed in.

The Weeping Willow is rugged, with that hairy look that seems to escape any classical canon. Its large size, its shapeless proportions, the way it stoops towards the water – and not up towards the sky like the poplars, for example, which look like thin flames – give it a rough appearance. But it is precisely this aspect that seems to assure us that something in it goes beyond immediate appearances and displays an ancient temperance, that of an old man who knows everything and must be taken care of.

The Weeping Willow appeared in Europe at the end of the 17th century, but it is native to the dry regions of northern China and seems to have something of the wisdom of the Chinese mountain monks who once drew magnificent paintings, as in the Mogao caves, where numerous frescoes were made to celebrate Buddhist beliefs in a beautiful variety of colours.

Colours that also guided Mehrali Razaghmanesh in this work, who admits to being very fond of the paintings of Claude Monet, the impressionist who worked so much on the Seine and so much on trees. The painter portrayed weeping willows several times at the end of his life, in the early 1920s. One of them is on display today at the Musée d’Orsay and is perhaps one of Monet’s most abstract paintings, as if he had found that in front of the great weeper we could see the world without any form.