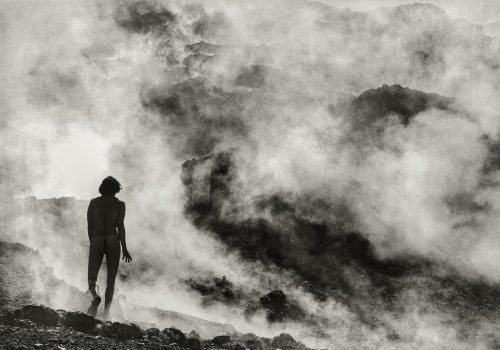 In my eyes, there are two essential ways for a photographer to apprehend the reality that surrounds him. The first, melancholy and poetic, is to isolate a fragment which immediately turns into the essence of the world. The second, dynamic and narrative, is to take the gaze out of the frame, to  imagine not only what may surround the scene, but also what was before, and after. Maurizio Leonardi’s images certainly belong to the second category.

This is one of the many paradoxes of the city where he grew up. To listen to him, Naples is a city more eternal than Rome. This reminds me of the remark that the actor Toni Servillo once made to me: “Naples is perhaps the only city in Europe where the people still live. “With Palermo,” I replied immediately, before sharing his smile. But eternity is not standing still.

Here, a sweeper may continue to be an officer in costume and a child may be brandished like a little pagan deity, but the population is constantly changing. “We are all Africans” repeated the neomelodic singer Franco Ricciardi in 1997. Twenty years later, during a peaceful Calabrian afternoon, the Burkinabe actor Koudous Seihon reminded me of Naples with a huge gleam in his eyes: ” Europe starts in Rome, that’s why I stay in southern Italy. ”

On my last trip to this city, I saw a Chinese lady, hesitant in Italian, being rebuffed by a post office clerk because she couldn’t understand the queues. Finally resigned, she turned to me before throwing a “mamma mia!” Loud, winking and sticking out her tongue, as was always done here. The city absorbs, as sure of its identity as of its contradictions, all those who have chosen to live there.

Among the seven Madonnas celebrated in Naples and its surroundings, there is one dedicated to femminielli, transvestites. In Brittany, it is no coincidence that Maurizio Leonardi has long worked on intersex people. In Campania, the Feast of Our Lady of Montervergine, which he photographed a lot, has become an international event. Naples is a naturally queer city.

Aristodemos, tyrant of Cumae, who by driving out the aristocracy, was in spite of himself at the origin of the creation of Neapolis – the new city – was said to be effeminate. If we look back to mythology, the mermaid Parthenope, which gave the city its other name, Parthenopee, had no gender. Even in antiquity, hermaphrodite sculptures were very common in Campania. The Archaeological Museum holds no less than five. Suffice to say that Pier Paolo Pasolini’s eyes watching us from a wall have nothing of a cliché here.

Animals haunt the photographs of Maurizio Leonardi, a fish from early Christianity, a ray changed into a mask or a child’s drawing, a serpent from the Garden of Eden giving the woman whose forehead it encircles a disturbing Cyclopean allure, octopus clenched in a fist , swordfish head turned mask too, perhaps echoing that of Pulcinella, supreme androgynous figure, whose recent film by Pietro Marcello, Bella e perduta, recalled that she traveled mainly between life and death.

In 1980, the Irpinia earthquake drove the future photographer from his house in Capodimonte. His adolescence was divided between the suburb of Scampìa – the setting of Gomorra by Matteo Garrone – and the seaside where he spent his days. On this earthquake earth, the reprieve of existence accompanies everyday life. In Mare Chiaro, where “fish make love”, as the poet Salvatore di Giacomo writes, teenagers climb up to vertigo to the “Palace of the Spirits”. At the Fontanelle cemetery, anyone can adopt an anonymous skull and ask for protection. This is called here the “ritual of souls”.

North of Naples, a naked man walks among the fumaroles of the Solfatara, towards what the ancients saw as the gates of Hell. We are at the heart of a huge caldera. Less than half a century ago, it rose three meters in the space of ten years, before falling and rising again. Some see it as a possible harbinger of a massive eruption. While waiting for the end of the world, Maurizio Leonardi continues to show scenes that play on history, as if, he says, “nothing could be changed”.

Olivier Favier is an author and translator from Italian. In 2016, he published Chronicles of Exile and Hospitality. He wrote several reports on southern Italy, especially Campania and Calabria.

Southeast Museum of Photography : From All Points of the Southern Sky