Best Of 2018 – Martine Franck, the unclassifiable 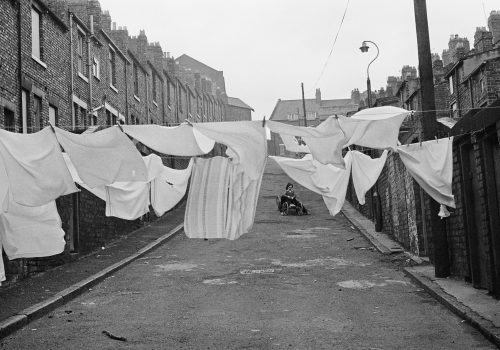 “She liked to take landscapes in photography because she liked the fixity of things. She could thus change the setting, evolve, and find the right image, “says Agnès Sire, Artistic Director of the Henri Cartier-Bresson Foundation, who knew the photographer well. In fact, from the beginning of the exhibition, we are struck by the undeniable quality of her photographs of landscapes. Whether in Morocco, England, Japan or China, Martine Franck managed to capture the beauty of a place with meticulousness. There are often silhouettes that dot the landscapes, who wander in, as a surprised and incongruous traveler. Such as this couple embracing and lying in a cemetery in the United Kingdom in 1978, and this young woman on the Normandy coast at the edge of the sea, with the huge cliffs behind her ..The elegant paintings, Martine Franck could take and that she sublimated perhaps for the best when she went to an island that had rocked her heart: Tory Island in Ireland.

There, not only does she take pictures of magnificent landscapes, but she immortalises the inhabitants. Because Martine Franck also had a taste for the portrait. Thus she does that of the islanders, especially when she crosses, for example, children playing in the sea. Living portraits, full of joy and games, and often filled with an intense reflection on life. This is for example the case of her portraits of celebrities that mark her work. Albert Cohen poses for her soon after receiving an award for Belle du seigneur. “He gave me a look,” Martine Franck told Agnès Sire when they looked at this photograph together. Touching portraits that prove how much the photographer excelled in this field. “The portrait is always a new encounter. Before shooting, I get nervous, then little by little the language ​ loosened up. What I’m trying to capture is the light in the eye, the gestures, a moment of listening or concentration – when the model does not speak, “she said.

In 1968, the poet Yves Bonnefoy remembers the day when Martine Franck made his portrait: “I see her now a summer afternoon in the deserted surroundings of a small village in Provence. Suddenly, in the heat, she had emerged, her camera in hand, from under the curtain of this light. Martine Franck also liked photographing photographers. She portrayed Bill Brandt, Saul Leiter, David Goldblatt, and also sculptors like Henry Moore in 1968 or Etienne-Martin in 1967. In 1999, she captured the image of Balthus with his cat Mitsuko in the Rossinière chalet in Switzerland.  In 1983, she caught Agnès Varda’s face in her home. She also portrayed Cartier-Bresson who hated being photographed. He asked her, one day, “what birthday gift do you want? And she answered, ” to Take pictures of you”.

Portrait of the photographer at home, sitting at his desk, drawing his self-portrait as he looks in a mirror. Absorbing the image of the photographer who goes through drawing and reflection … Cartier-Bresson said: “drawing is a meditation”. We can say that a large part of the photographs of his wife are too. Because Martine Franck was not interested only in personalities. She also frequently photographed anonymous, whether in the street or in specific places. As such, she often went to old people’s homes and photographed them. We are moved by these aging characters who seem stunned by fatigue and illness and who, despite everything, try to smile at the photographer.

Martine Franck, shortly before her death, had made a series of photography quite strange and beautiful, an abstract series. She took Japanese garden details in Kyoto, ancestral caves in China and made an impressionistic palette. This series was presented in the United States in 2012 a month after her death. The photographer had told Agnès Sire: “Do not worry, I’m going to blend in with nature”. “That’s what she did with this job,” says Agnes Sire.