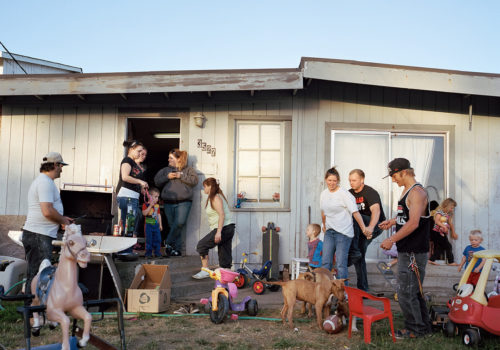 The bigger picture may be one of the extraordinarily contingent –the pandemic presently being endured is a punishing reminder of this – but seeing the smaller, more predictable side of life goes on. The curator of But Still, It Turns, Paul Graham, expresses this in terms of transforming random particles into ‘belonging particles’ and this idea – turning the unruliness of reality into patterns and forms that we respond to – is what brings together the work of nine photographers in an exhibition at the International Center of Photography in New York (until 9 May) and in book form from MACK.

The title references Galileo’s reputed remark after the Catholic Church induced him, under threat of torture, to cease propagating his heliocentric heresy. The remark is taken by Graham as an allegory for the continuing need for photography to record and warm to the lived world. While pointing a wagging finger at the art world’s fad for promoting ‘constructed, conceptualized and staged imagery’, he seeks to swing the pendulum back to photographing the understated, everyday world where people make do with the places where they find themselves.

One such place is Delmar Boulevard in St Louis where residents on its north side, 95% black, have a life expectancy of 67. A short walk south brings one to a 70% white neighbourhood where this figure metabolizes to 82. The duo of Emanuele Brutti and Piergiorgio Casotti picture this incongruity but, in their visual stroll along Delmar Boulevard, avoid being declaratory. While the statistics are factual statements, their images take on metaphorical meaning. Hence street scenes, rendered with a vividness that bring to mind Eggleston’s early work, announce certitudes in heightened colours only to be undercut by other pictures, in black-and-white, from the north side of the boulevard: a woman’s face in Rembrandtesque shadow cast downwards; a man’s eyes gazing inquiringly upwards; empty rooms with trailing, disconnected wires. Returning to representations in colour, linear road markings and the signs and stop lights of street intersections become a semiotic discourse signalling exclusions and divided spaces.

Gregory Halpern’s photographic journey, from the Mojave Desert to the Pacific, mixes lyrical beauty, memorable portraits and uncertain gestures like one of a palm tattooed with seven stars (perhaps referencing the seven states of the U.S. Deep South that ceded to form the Confederacy).

All but one of the book’s photographers are from the USA or residing there and their pictures coalesce to depict moments of indecision and uncertainty. The landscapes and people, adapting to particular geographies, are contoured by home-grown pathologies and the book’s contributors reach towards expressions of the state of a nation. The shared interest in faces and bodies becomes a common grammar that holds together their diverse ways of working with a camera. Vanessa Winship, travelling in the West, Midwest and South of the United States from the UK, is the book’s outsider. Looking from the periphery, the ambiguity and reticence she finds is mirrored in melancholy shades of grey and shifting tonalities.

Where Winship intuits distance and reserve, Curran Hatleberg, born in the USA and living in Baltimore, looks for intimacy and community. He photographs scenes of sociability: preparing for a barbecue, sitting on a car hood for lunch at a workplace, hanging about a gas station or watching a show. Yet they remain fragmentary moments of togetherness that cannot transcend a felt loneliness; in the midst of others, there is a longing in figures that look solitary.

The strange arresting of the ebb and flow of life is something that the book’s nine contributors have in common, epitomised in Kristine Potter’s blending of landscape and portrait on rugged terrain in Colorado. Her sense there of a yearning for groundedness, jeopardized by vulnerability and uncertainty, a need for contact and wounds to be healed, becomes both prescient of a present plight and a seemingly permanent condition of untethered Americanness.