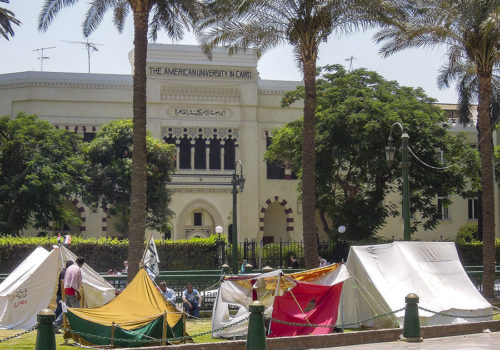 When the events of January 2011 erupted, I had been living in Cairo for over 10 years, an incredible crowd passed under my windows this January 25th, I went downstairs, took some pictures, people invited me to come with them, they were happy and determined, they were going to write a page in the history of their country, Egypt. Alas, as always, the repression seeked to bring the people back to the “right path”, this time, once again, it was terrible. The fights, the scenes of jubilation, terror and faith were described, photographed, told, … I did not follow this path, for me the representation of this period began on April 14, 2011 when leaving the metro Sadat I saw the soldiers replanting the lawn, thus indicating a return to “normality” … I decided to see and show how Tahrir Square became a kind of stage of the Greek theater, of skḗnē, these tents, these covered places , this place where the actors played. I was there before / after, never during the violence. The occupation of the territory of this square gives a fairly precise landscape of the typologies of the speakers. I particularly focused on the geography of this place and took photographs of the tents, communications structures, supplies, …

After occupations and then evictions, the soldiers replanted the lawn again, this exhibition tells of the landscaped waves, followed by hope and followed by violence, without showing them, as in the stories of the Greek theater …

It is an inventory, a sort of catalog of the places occupied in the square by the demonstrators. Each section has its own identity, its own positioning. Between the first days of July 2011 and the last days of the occupation under the presidency of Mohamed Morsi the typology of the landscape of the place changed.

The exhibition is a “timeline” of two years of this fluctuating occupation, the evolution of content, and complaints. There is nobody in the photos, or very few, the main thing is the place, the place and what is shown and said in them. There is no aesthetic research, just the desire to show as close as possible to the field that this Egyptian spring has exhausted itself, slowly … towards a new winter.

In partnership with Editions Images-Plurielles