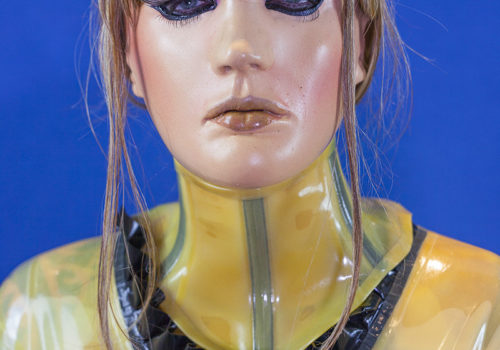 In consultation and in agreement with the photographers, and after having examined the various possible options, the Grain d’Image association has chosen to maintain most of the programming of Boutographies – Rencontres Photographiques de Montpellier 2021. The exhibitions will be installed at the Pavillon Populaire, as planned, with the agreement of the City of Montpellier. The screenings will also be held there. The exhibition celebrating the 20th anniversary of the festival will take place in the Salle St Ravy. A certain number of Hors les Murs venues will also feature scheduled exhibitions. The opening date for the event is May 19 and will

Agata Wieczorek is presented as part of the official selection.

“Fetish of the Image” by Agata Wieczorek is a project that combines photography and video to present a subculture surprisingly present all over the world: masks fetishism. The project portrays users of female silicone body masks, investigates developments in binary gender design, and explores how increased globalization and interconnectivity do not necessarily lead to a ‘democratization of visibility’.

The masks wearer are mostly men, while their practice is based on using a disguise they aim to become someone else: a woman. The disguised aims not only to disguise as a woman, but literally to become one, by slipping totally into the appearance of a female body. Thus, the costume elements – realistic silicone masks and body suits – are called “second skins” because they reconstruct the entire surface of the human body.

Agata Wieczorek (1992, Poland) lives in Lodz, where she is currently completing a master’s degree at the National Film School. She previously graduated with honors from the Strzeminski Academy of Arts in Lodz, where she studied graphic arts and painting. Agata Wieczorek’s practice combines film, photography and animation. His work has been exhibited and awarded internationally, including at the Obscura Photography Festival, Penang (finalist), Warsaw Photo Days (Grand Prix), Organ Vida International Photography Festival, Zagreb, and GESTE in Paris, among others. Along with her artistic practice, she contributes to the writing of Lynx Contemporary magazine.