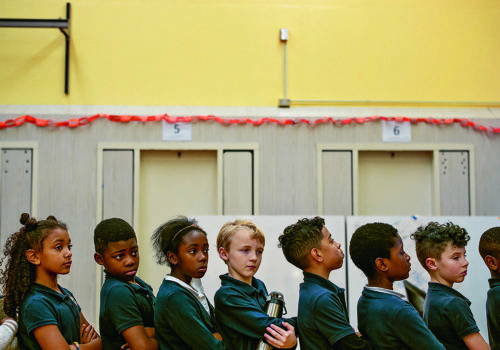 Spending two years telling the story of a class in a school in Portland, Oregon, one of the whitest cities on the west coast of the United States, was a significant turning point in my life.

Rather accustomed to living and photographing indigenous peoples in the wild, here I was “confined” in a small austere school: two long corridors, an asphalted courtyard, a canteen/gymnasium and my class, one of the darkest in the school. The light is not beautiful there and yet the story unfolding before my eyes is of such depth that I did hang on, drawing on narrative resources that I did not suspect I had to tell it.

The Kairos school was founded by 4 African American women with an innovative educational approach in a state marked by segregation: blacks were banned from living there for a long time. The students are almost all from minorities. Kairos fights against the racial and social segregation that plagues the American society.  And it is there that Jason Davis, in his forties, is recruited as a head teacher for the first time in his fresh career. He is a beginner. Responsible for two end-of-primary classes, son of an Iowa policeman, Jason Davis does not know the codes of his students, he who grew up in rural Republican Midwest. He gropes, multiplies the blunders and missteps. His young students rebel, the teacher loses control, like many others before him. Jason Davis can’t sleep at night. But he hangs on and by dint of questioning, creativity, hard work, he metamorphoses during his second year into an excellent teacher. It took me two years to report in depth and I hope in finesse on the subtlety of the human relationships that were played out in this class: strong, moving, tender and sometimes hard.

I witnessed the birth of a teacher, a fundamental profession and immersed in the harsh conditions of African Americans who by their color are born disqualified in this violent society.

This book is unlike any I have done before. Back to color. I also got involved a lot on the layout, wanting it to be different from my previous ones and in line with the graphic spirit of the work I am developing now. The relationship between text and images was inspired by a book by a photographer I admire Rob Hornstra. Like him I only work to make books and exhibitions. Two years per story minimum. Now, for my next project I am on my second year with the police officers of a provincial police station to tell the life of its men. Another very powerful experience.

Famous for his photographic works on the first peoples, Pierre de Vallombreuse for the first time looks at the Western world and its urban tribes. An American class is a scene behind closed doors, a chronicle in images of the relationship between a teacher and his students. An introductory text weaves the storyline, quotes accompany the photographs.
The details abound, the expressions of beings are captured with rare acuity, the situations are linked with poetry and lightness. And, finally, we keep a memory of this book for a long time.