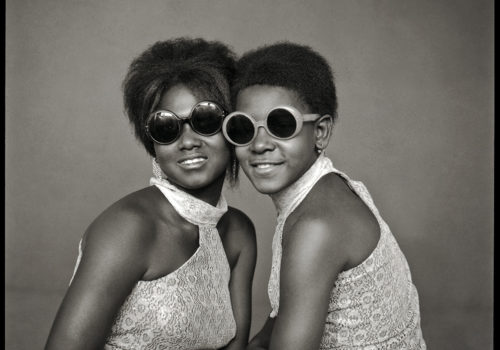 In the 1990s, Revue Noire, much more than a publication, revealed a vibrant culture in Africa. The exhibition revisits this new way of writing and showing people the different forms of contemporary creation on this continent. It is accompanied by a selection of works of art and mainly by a panorama of 300 photographs by 28 African photographers allowing to discover the field and the different historical facets of African photography up to contemporary artists, such as Joël Andrianomearisoa, stage the publication for Les Abattoirs.

The desire to reflect the modernity and creativity of the African continent with a will to go beyond the notion of post-colonialism, With essentially personal funding, for nearly 10 years, from 1991 to 2000, and 35 issues, this quarterly, much more than a publication, revealed an artistic representation little known in the West and touching all forms of expression: from visual arts to fashion, from literature to cinema, from photography to design and dance.

“Until the early 1990s, Africa was a virgin continent, wild and miserable, as seen by the great Western reporters between spectacular ethnology and horrified reporting on misery and wars. African photography, at least in that it stood out from the expected image, was unrecognized.Many artists from Africa are now considered artists before being ‘African artists’.

While Revue Noire is not the only one to have participated in this development, it has largely contributed to this recognition of African creators, not only by others, but also by themselves.

Twenty years later, this exhibition looks back on ten years during which the review crisscrosses Africa and most of the continents linked to it and devoted issues in Senegal, Benin, but also in the Caribbean and the Indian Ocean. This journal is historic today in the recognition of African art and in its working method, that is to say a journal as an interpreter of contemporary creation from an entire continent. Today Revue Noire continues its history with art book publications.