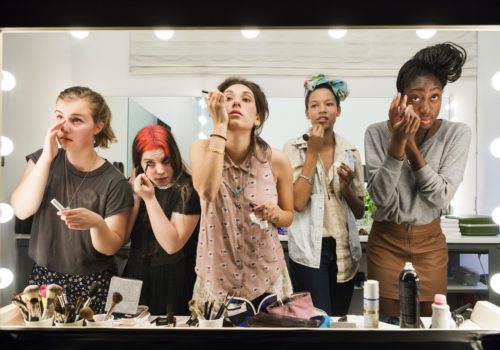 Documentary photographer and filmmaker Lauren Greenfield has been working for the past twenty-five years to chronicle a previously unprecedented global obsession with wealth and materialism. Remarkable in scope and depth, from Moscow high society to Atlanta strip club royalty, Greenfield’s photographs explore the desire for more and succeed in revealing gender dynamics, cult of celebrity, consumerism, power of sex and marketing, and their eventual consequences. Generation Wealth, her latest series, is an especially timely and pertinent body of work that serves as a visual timeline tracing the rise, and fall, and rise of the pursuit of wealth in America. This work is currently on view at Fahey Klein Gallery in Los Angeles and available in a book recently published by Phaidon.

Beginning in Los Angeles in the early 1990’s Lauren Greenfield documented youth culture and its preoccupation with celebrity, status, and affluence. This powerful microcosm would prove to be the very epicenter of wealth and celebrity obsession, as Greenfield witnessed its pervasive effects spread across the nation, reaching every corner of America regardless of region or class. Greenfield photographed the mega mansions, luxury hotels, private parties, beauty pageants, and designer bags that began to symbolize wealth, success, and fulfillment in America. As this phenomenon spread globally, Greenfield moves onto the pinnacle of affluence— the wealthy Russian, Chinese, and European superrich whose excess is dizzying in comparison.

With the closeness and candor that Lauren Greenfield’s photographs are synonymous with, her subjects begin to reveal more than the flashy and fleeting outward displays of status, wealth, and beauty. Greenfield brings the real cost of all this artifice into focus, whether it is the painful image of a patient undergoing plastic surgery or the shells of mid-constructed homes abandoned during the economic collapse. The consequences of a decades-long pursuit of more are complex and take many forms: financial fallout, body image insecurities, addiction, and ultimately dissatisfaction.

Sociologist and cultural critic Juliet Schor summarizes in the foreword to the book: “ ‘Be careful what you wish for,’ we are warned by one of Greenfield’s subjects near the end of this odyssey. They are often filled with pain, longing, and remorse. There are the ultrarich teens of L.A. whose materialistic parents have no time for them, the low-income kids who sacrifice body and soul to keep up on prom night, or the white-collar felons who recognize the emptiness of their lives, even as they remain caught up in them. There are also powerful redemption stories within these pages, although in the end, Greenfield concludes that we find the allure of materialism so tempting that the moment of morality and simplicity that emerged from the crash may not endure.”