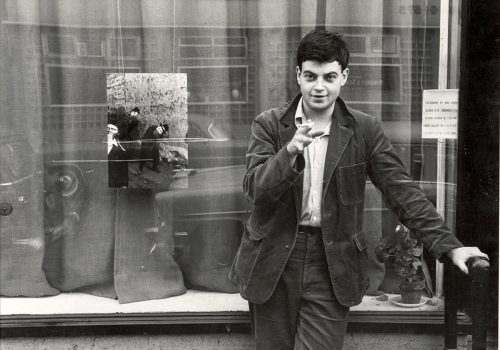 Larry Siegel, noted photographer and groundbreaking New York City gallerist whose career helped shape vital developments in the emergence of photography as an art form, died Thursday January 9th at his home in Brooklyn after a long illness, at the age of 85

Larry Siegel has been photographing for a half-century.  He began his interest in photography at the age of 12 by buying a miniature falcon camera through an ad he’d seen in a comic book and began developing orthochromatic film under red safelight in the basement with mother’s soup plates.

Born in 1934 in Jersey City, NJ but soon after the family moved first to Queens then to Brooklyn.  He studied commercial photography at the Metropolitan Vocational High School located in Lower Manhattan.  He got his first full-time job assisting a legal photographer and several years later Mr. Siegel printed for the photographer Jerry Schatzberg, famous for his early Bob Dylan pictures and Robert Frank.

Mr. Siegel married in 1959 and lived on the Lower East Side. He opened the Image Gallery later that year at 100 E. 10th Street. Image was the only photography gallery in NYC at that time that was not in a coffee shop. He taught photography at Y’s and community centers and was an assistant to Robert Frank from 1960-61.

Mr. Siegel likes to recount that the first person to enter the gallery, hours before the opening reception, was Eugene Smith, the famed photographer. Mr. Siegel apologized for the show having not yet been hung, the prints still on the floor. Mr. Smith graciously volunteered to help hang the Image Gallery’s first exhibition, a two-person show of the photographs of Lou Bernstein and Fred Plaut.  Other distinguished photographers to have visited the gallery were Aaron Siskind and Minor White. In response to a fund’s appeal to help the gallery survive, Ansel Adams sent a check for $25.

The Image Gallery showed Bernice Abbott’s Atget prints prior to their exhibition at the Museum of Modern Art and the first one-person shows for Gary Winogrand and Duane Michals. Among other photographers of prominence shown were Rudy Burckhardt, Saul Leiter and David Vestal. Image published two books of photographs: “Journey To The Cape: The Photographs of Sid Grossman” edited by Charles Pratt and David Vestal and “Railroad Men” by Simpson Kalisher.

He had his first exhibition at Image in 1960 and sold a print to Steichen at MOMA for $10 dollars.

In 1966 Mr. Siegel went to live in Mexico City with his wife and two children.  He did freelance magazine work and taught photography at the San Carlos Academy and in private workshops. Mr. Siegel enjoyed a warm friendship with the Mexican photographer Manuel Alvarez Bravo. The now prominent Mexican photographer Graciela Iturbide was a student in Mr. Siegel’s workshop.

Larry Siegel was the first full-time photographer hired by the Organizing Committee of the Mexican Olympics in 1967-68.

Portfolios of Mr. Siegel’s work were published in the Mexican photography magazine Fotomundo and the poetry magazine El Corno Emplumado.  He had major exhibitions in Mexico City at Casa del Lago in 1967 of his American photographs and at Galleria Peccanins in 1968 of his Mexican Photographs.

Mr. Siegel returned to NY in 1970 and founded and directed the Midtown Y Gallery 1971-81. In addition to one, two and three person exhibitions, the gallery had as part of its mission the exposure of new talent, there were many group theme-based exhibitions, among them: “Coming Of Age In America” a show comparing our attitude towards youth and aging; “The Jew In New York” highlighting the Jewish presence here; “Women Photographers,” a show with such an overwhelming response that over forty photographers were shown in two parts; “New York City in World War II” with photographs from the Library of Congress, the National Archives and the New York Public Library. “Coming Of Age” and “The Jew In New York” were traveled extensively.

Well-established photographers were also shown, among them David Vestal, Larry Fink, Graciela Iturbide, Saul Leiter, Leon Levinstein and others.  For two years Mr. Siegel edited a publication called “Photo Reporter” which had news of importance to the photography community and reviews, by him, of shows in other galleries around town.

During this time Mr. Siegel sold prints to the Bibliotheque National of Paris,  Galerie Fiolet of Amsterdam and to private collectors.

In 1981 he photographed 14th St. under the auspices of a National Endowment Grant which resulted in a book “14th Street” published by Matrix Press in 1980.  During this time he also enjoyed teaching photography at New York’s School of Visual Arts (1970-80).

After 1980 Siegel traveled extensively in Europe with extended trips to Morocco, Egypt and Turkey. He lived several years in Northern Italy in the town of Pavia (near Milan) where he taught photography and had major exhibitions in Milan at Spazio Foto San Fedele in 1986,  at Luisella d’Alessandro Gallery in Torino in 1987 and in Pavia at the Colegio Cairoli in 1988.  Mr. Siegel did assignments for Italian magazines in Milan, among them Epoca and Genius as well as taught workshops in Pavia and Barcelona, Spain.

Siegel returned to the US in 1988 and taught at The Center for Media Arts (now defunct). After a serious automobile accident Mr. Siegel spent many years recuperating.  As a street photographer the accident had a major impact and halted his career for more than 2 decades.  It is only recently that he went back on the streets of Brooklyn and photographed neighborhoods and parks.