The America of Robert Frank 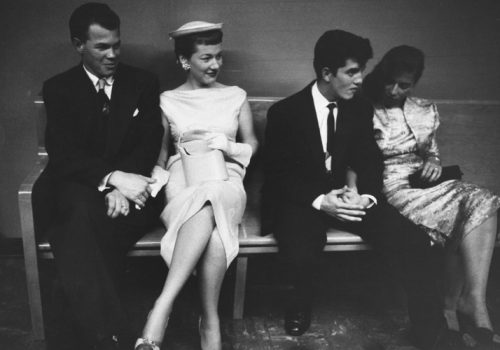 Danziger Gallery presents an exhibition devoted to Robert Frank  American photographs, his best known and arguably most important work. The exhibition will be comprised of 40 photographs – 15 from Frank’s seminal book “The Americans” (now celebrating the 60th anniversary of its American publication) and 25 unpublished works from Frank’s travels at the time.

Born in Zurich in 1924, Frank began his career in photography in the mid-1940s before emigrating to America in 1947. As an immigrant, Frank was fascinated by America and after his first travels around the country he applied for a Guggenheim Fellowship to fund a longer and deeper journey all over the country.

In his proposal to the Guggenheim Foundation Frank wrote: “The photographing of America is a large order – read at all literally, the phrase would be an absurdity.” The “total production” of such a project, he added, would be “voluminous.” However surprisingly the proposal was accepted and Frank embarked on a two-year journey around America during which he took over 28,000 photographs.

Eighty-three of the images were subsequently published in the book “The Americans” — widely recognized as one of the greatest photography books ever published.

Sarah Greenough, senior curator of photography at the National Gallery of Art in Washington noted: “Frank revealed a people who were plagued by racism, ill-served by their politicians, and rendered increasingly numb by the rising culture of consumerism. But it’s also important to point out that he found new areas of beauty in those simple, overlooked corners of American life – in diners, or on the street. He pioneered a whole new subject matter that we now define as icons: cars, jukeboxes, even the road itself. All of these things, coupled with his style – which is seemingly intuitive, immediate, and offkilter – were radically new at the time.”

As with every photo editing process, out of necessity many great photographs were left out of “The Americans”, but rather than being forgotten, Frank chose to print these images in the same 11 x 14 inch format as the ones included in the book. There were no plans to ever publish a second volume, but from the quality of the unpublished images we will be exhibiting, it is clear there would have been little drop-off in quality.

At the end of the 70’s Franck removed himself from photography and turned to making movies, to finance both his life and his film, in 1978, he sold his archives along with prints  made to complete the transaction.The prints exhibited here all come from this sale. The largest collection  of this important figure in the history of photography. They are vintage prints ( printed about the same time as the pictures were taken) or printed at the latest in 1978 by Sid Kaplan who made most of the prints during three decades.