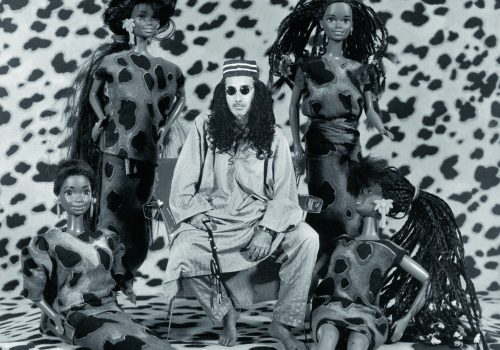 Au Royaume de Babok is a very personal monograph by Olivier Rebufa, one could say that it proceeds for this artist from a vital necessity after an intense and unusual experience of shamanic practices linked to his childhood spent in Africa. It was there that he maintained an exceptional bond with the one he calls “his second mother”, a Guinean woman named Dina, priestess, diviner and healer, and who – a rare thing for a Westerner – recognized him as her son for the legacy of her practices.

In the early 2000s, in his dentist’s waiting room, Olivier Rebufa stumbled across a women’s magazine containing a reportage on African fetish women. A question will arise, amplify itself until it irrigates his artistic approach. Would it be possible to cast a spell on a photograph, of what weight – real, symbolic or digital – would “fetished” images take on? Would they lose their silver salts, their digital definition, their plastic qualities? This questioning of the magical potential of photography materialized in the work he then undertake. But before that, the objects had to be embodied for his images to assume their density of questioning, doubt and, why not, darkness. He had to meet Maman Dina to enter Babok’s Kingdom …

The originality of the book lies in the mix of visual elements: it contains both images from the personal archives of Olivier Rebufa (recognized in the artistic sphere for his self-portraits integrated into miniature universes, surrounded by Barbie dolls, toys or models …), photographs he took during his stays in Dakar or elsewhere, photographs of his works and their creative process, self-portraits, photographic experiments, all hybridized in a setting page that plays on the graphic codes of family albums, books from our childhood, work notebooks and exhibition catalogs.

The book’s editorial singularity is also due to the texts. They were written in the first person – thus embodying, in fact, Olivier Rebufa’s story – but not by him since it is his long-time artistic accomplice, the historian and art critic François Bazzoli, who is the author, thus maintaining a stimulating fictional double with the artist.

The Fukushima nuclear disaster has permanently disrupted the once intense relationships between individuals, their communities and the cycles of nature. How then to live in a new environment under the constant threat of high radiation rates? How to exist when the simple freedom to live in the present has been suppressed, when sensual sensations and perceptions have been shaken and the bonds uniting a community with its environment have been compromised?

These are the questions raised in this book, with modesty and delicacy, in a dialogue with several voices. Based in Japan since 2010, the French photographer Delphine Parodi went to Fukushima for the first time in the summer of 2012. For seven years, she returned there regularly, both inside the forced evacuation zone of 20 kilometers around the plant only in the “three countries” of Fukushima prefecture. She photographed, listened and collected testimonies from evacuees. Her images made with a medium-format camera, presented in the form of diptychs, create a dialogue between intimate landscapes, often unfathomable – rivers, mountains, lakes, forests, crossroads, isolated benches … – and portraits of inhabitants, the body at the junction between interior and exterior, as a vector of environmental awareness. Her images suggest the alteration of their relationship to these places as well as the importance of individual memory.

Japanese novelist and poet Yoko Tawada, who lives in Germany, also started work following the disaster. Delphine Parodi and Yoko Tawada meet in Berlin in December 2012. They decided to unite their voices. Yoko Tawada in turn went  to Fukushima and met the people that Delphine Parodi had photographed. She wrote the 24 poems published in this book, first in German, before translating them herself into her mother tongue, Japanese, and then they were translated into French and English. These are poems that borrow both from the Japanese spirit and from a very contemporary language, guided by the situations and the voices that she has patiently picked up.

Yoko Tawada and Delphine Parodi made several more trips to Fukushima, most often separately, together in the summer of 2015, but with the same need, that of listening to the inhabitants, what they have lived and what they continue to to live, carried by the common responsibility of putting into words and images this sum of individual events.

Combining photographic diptychs, poems and testimonies in four languages, Out of Sight is the result of this long-term project. Navigating between the visible and the invisible, this book gives shape to what remains a constant but imperceptible threat, and is intended as a reminder of collective consciousness in these uncertain times.

This book has just received the HIP Prize 2020 in the Nature and Environment category.