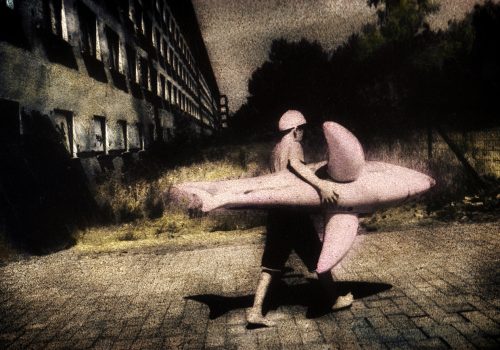 As a child, there are the serious and sometimes painful faces of adults who are silent when she walks into the room, then sentences that come in bits and pieces over the years. Names and places that are remembered even before you know to who or what they correspond to. In this photographic quest carried out between 2018 and 2020, the common thread is the name of these places marked by history: Munich, Dachau, Prora, Nuremberg, Prague, Terezin, the Wolf’s Lair …

Starting from a black and white print that she enhances with oil painting, Irène Jonas accentuates the absence of landmarks between past and present, the confusion between dream and reality to merge intimate memory and historical memory.

Sociologist and freelance photographer. She has been a member of the Developer Agency since 2016. In 2018, she received the first FotoMasterclass award.

“Born at the end of the 1950s, I only knew of the war what was mentioned and little told about it. Yet it was still very close, perhaps too close, in people’s minds. As a child, when the white rectangle appeared appearance on the television screen, denying me access, I assiduously looked thru the keyhole. The first images of the war and of the camps, it is alone in the corridor, my eye riveted under the doorknob , that I saw them. Then there were those serious and sometimes painful faces of adults who became silent when I walked into the room, then phrases that have come in bits and pieces over the years. Names and places that came together. were registered before I even knew who or what they corresponded to. Fears also, totally irrational, which made me prepare every evening without saying anything my small suitcase, in case … It is only good while later that it was possible to make the link between the little stories and History with a great H. ”

(Excerpt from the introduction)

The images, in addition to the introduction by Irene Jonas, are accompanied by texts by Camille de Toledo, writer, and Alain Keler, photojournalist (MYOP agency).

More than twenty years after the 1998 peace accords that ended the period of the “Troubles”, and as the implementation of Brexit puts Northern Ireland back in the spotlight, this bilingual three-part book takes a fresh look at the recent history of this vulnerable territory.

He juxtaposes scenes of everyday life taken in the 1970s, at the heart of the conflict, with those of present-day Northern Ireland, alongside a series of some 20 portraits.

Bernard Lesaing, photographer-reporter, took the time to bond with the locals and experience local life.

In this book, he invites us to follow him on the path to reconciliation by following the narrative thread of black and white. Texts from academics and testimonies from residents shed additional light. This collaborative project is helping to see emerge a new representation of Northern Ireland, revealing the vitality of its people, the plurality of their experiences and the persistence of hope in the face of adversity.