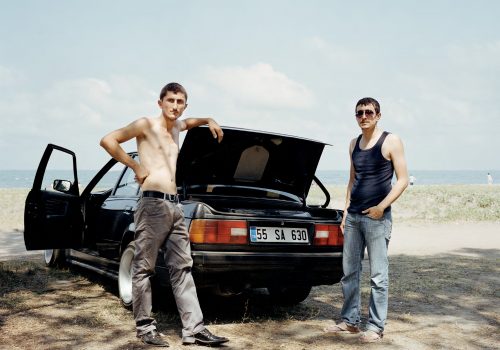 Transanatolia is a peregrination to the borders of Anatolia. For 5 years, Mathias Depardon photographed new Turkey, to the borders of Azerbaijan and Xinjiang where Turkey remains the “motherland” which radiates and diffuses its soft power. The fragmentation of the Ottoman Empire at the end of the First World War remains a trauma, and pushing back the borders provides revenge against historic wounds.

These remote places help to understand the great changes that are shaking the region. Through portraits and landscapes, Mathias Depardon explores a country torn between rampant modernization and Ottoman reminiscence.

Turkish President Recep Tayyip Erdoğan’s “New Turkey” in power since 2003 is the affirmation of power and ambition. Thanks to its strategic geographical location and its imperial history, Turkey wants to play a central role in the march of the world. Erdoğan sees himself as the caliph of a vast Turkish-Islamic space whose outlines, “the borders of the heart”, evoke a mythified past.

The fragmentation of the Ottoman Empire at the end of the First World War remains a trauma and the Turkish leader imposes an authoritarian, paternalistic and police state to reclaim the lost territories. The method is often brutal. The transformation of society that it imposes is radical.

In this book Mathias Depardon tries to picture the borders of the heart evoked by the Turkish President. To probe the “Turkish soul” and perceive all the complexity of its identity construction, we have to project ourselves to its borders and even beyond. In Azerbaijan or Crimea, Turkey remains the “motherland”.

It radiates, diffuses its “soft power” from the Balkans to Asia, from the Black Sea to the Red Sea. It exports its very popular washing machines and television series to dozens of countries. Its influence extends to all the former Ottoman territories and, beyond, to the borders of China, in Central Asia, the distant homeland of the Turkish people.

Ever since the lockdown was announced in France on March 16, 2020, photographers of the MYOP photos agency have felt the need to document this historic event.

For the whole duration 56 days, highly sensitive to the impact of Covid-19 on our environments, we photographed the parts of the country where we were locked in and restrained. Every day, the pictures we shot were posted on our Instagram account, putting together a line of 465 images reproduced in extenso on the back of the Leporello.

From this corpus we have selected 56 pictures, one per day, creating a new chronology of this period where the horizon disappeared. Michel Poivert has drawn free inspiration from them to write a serie of anti captions.

An event lasting 56 days like a bandwidth of existence: there is no icon for confinement during this health crisis, no emblematic face, no highlight; it could be a phoney war in which the way the days repeat themselves seems like someone wandering.

The different MYOP views are like a concert being played using a discordant score, a visual twelve-tone set of viewpoints, different scenes joined together by an atmosphere, a kaleidoscope, optical prose: in grammatical terms one would say parataxis.

Sine Die is a photographic project of agence MYOP under the artistic direction of Pierre Hybre, Stéphane Lagoutte and Jean Larive.