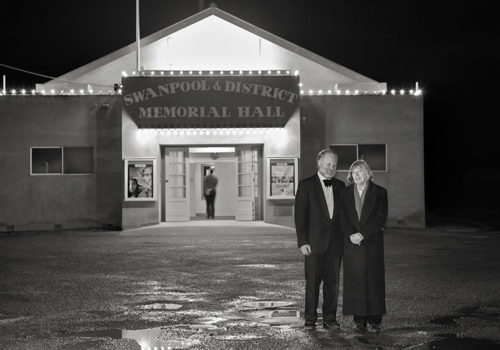 “In the Folds of Hills” depicts a lifestyle that has now passed or rather a lifestyle that urban dwellers assume no longer exists. Yet this is a contemporary work with  photographs taken between 2009 and 2013, making this story even more remarkable.

Here in this tiny rural community of Lima in northeast Victoria, around 100km’s from Melbourne, people live as they did before time was measured in bytes and self-worth equated to the number of ‘likes’ one received. Lima’s residents move to a rhythm and at a pace that is in direct contrast to the frantic hum of the 21st Century. And it is a somewhat magical experience to discover this tightly knit community.

Within the red cloth-bound cover of “In the Folds of Hills” the photographs of Kristian Laemmle-Ruff, and the words of his mother Charlotte Laemmle, invite the reader to sit and stay awhile; to sip tea from old china cups at the Formica kitchen table, to smell bread toasting in front of the wood fired stove, to shiver in the chill of milking cows at dawn or play a hand of cards with friends.

“In the Folds of Hills” life is slow, suspended in time, and the notion of being connected 24/7 to a cyber world completely foreign. In some ways it is a lifestyle that many on the ‘hamster wheel’ envy, although there is no attempt to romanticize life on the land; it can be tough. The characters depicted in this book are indicative of the pioneering spirit that is the backbone of rural Australia. They’re not afraid of hard work, or of lending a helping hand to a neighbour. Here community spirit is not an ideal it’s a reality.

With his personal work Kristian is driven by a desire to further his knowledge on societal issues be it homelessness in major urban cities like Berlin, or the environmental impact of modern architecture. In this instance he tells me the impetus for “In the Folds of Hills” grew out of a desire to know more about life in the country and in particular Lima, a town that he has visited numerous times; Kristian’s family has a holiday house not far from Lima and as a child he spent many weekends there.

“I realised I didn’t have a good understanding of what life was like in the country for the farmers or where it is heading, and that most of my friends didn’t either,” he explains. “I wanted to understand the characters that live out there, those people who go through the droughts and the floods and the good and bad seasons.”

But it wasn’t until Kristian took a trip to Lima with his mother Charlotte, who had grown up on a dairy farm, that the concept for “In the Folds of Hills” really crystallized for this 26-year-old documentary photographer.

“Mum was working on a short film and needed to recreate a scene from her childhood. She’d come across Rosie and Wally Daws who own a dairy farm near Lima (they are the first couple to feature in the book). She just fell in love with them and their 1950s dairy where they were milking four cows a day. It was completely out of this world and Mum felt like she’d stepped back into her five year old self”. Her enthusiasm for these farmers who were living in a community that was virtually frozen in time rubbed off on Kristian and the next time Charlotte headed to Lima he joined her.

In early September 2009 Kristian and Charlotte visited the Daws along with another farmer Ralph Pearce. They also met the couple that operated the local cinema in the community hall with its original film projector still in operation. Kristian was fascinated and spent four days photographing what turned out to be half the content for “In the Folds of Hills”.

“That visit was incredibly productive and from then on I was tied to the project and knew I had to do something substantial with it.” Over the next five years Kristian returned numerous times to flesh out the story, shooting in different seasons to capture a more complete picture of life on the land. Each visit he learned more about the characters and the intricacies of their lives as they chatted over bottomless cups of tea. He found the country folk incredibly welcoming and open, yet curious also that someone was interested in their ordinary lives.

Originally Kristian envisaged the project as an exhibition, but as the story progressed his thoughts shifted to the book format. “A book makes you slow down, this is how people used to look at photographs. They’d sit down and have time to contemplate and let the photograph do its work – every photograph is trying to achieve something and if you don’t allow it to do that and just flip to the next page or scroll down a million images on some website you are losing out and missing the point”.

Drawn to the black and white imagery of documentary photographers such as Dorothea Lange and Lewis Hine, Kristian chose to use this medium rather than colour, to capture that vintage style where textures and tonal attributes allow the subject to be the focus.

“This is the first series of work I’ve ever done in black and white and it was really hard to let go of the colour,” he says explaining that the original images were shot in colour, a platform he’s been immersed in from the beginning of his career. “But now I am a little bit obsessed with black and white,” he laughs.

“In the Folds of Hills” is divided into chapters each beginning with a written story by Charlotte Laemmle. Her stories complement Kristian’s insightful and thoughtfully composed photographs creating a rich narrative that truly captures the essence of these characters, their tight-knit community and the realities of living on the land.

Wanting to avoid producing a book full of “clichéd action shots of farmers milking cows or shearing sheep” Kristian found balance in juxtaposing the working aspect of the farms along with the personal to create “a more sensuous invitation into country life where you sit down and you are looking at wallpaper. Or there’s a clock ticking on a wall or the smell of musty old rooms that haven’t had anything happen in them for decades. I enjoyed using the more abstract images to slow people down and get them in the mood of the country and the smell, and taste and pace of things there”.

Kristian says through the stories of these country folk he’s come to realise that while city people might idealize country life as relaxed and old fashioned, there is a lot changing in rural Australia and that these small farms may soon disappear in the march of progress.  “There is still hope in these communities, but there is also a sense of unease and change where kids have moved away and farms aren’t productive anymore”.

But what really sets these rural towns apart is the sense of community, a facet that no longer exits in our sprawling cities. “People help each other out. If one person has a bit of extra cream that week they’ll drop it around to their mate down the road because he’s been sick and they’ll make sure he’s doing okay and bring in his mail for him. All these little gestures are constants and in the familiarity of rural life they all know each other and their family histories. These are long lasting relationships and there is a lot of trust and caring in these communities. A lot of these characters have been friends for life”.

As we wind up our interview Kristian tells me about one of the characters in the book Rosie Daws who’s 80 years old and has only been to Melbourne once even though it’s less than two hours drive away. “She said to me, ‘I didn’t like it, we just did our business and got out of there’. These people are the real deal”.