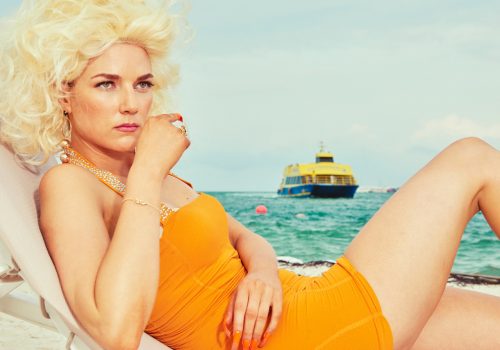 Entitled Desperate Dreamer, the documentary dissects Roy’s meticulous stagings. It reveals the proximity of Roy’s work with the Hollywood universe, while at the same time placing her work in a mixed critique of  the superficiality, emphasized by the posture of the bodies , the mechanics of pleasures and the industrialization of travel.

Del Barrett’s words deflect the ambivalence of Roy’s work, standing at once aloof from this world and at the same time being an actress in her photographs: “The Tourist contains all the Roy hallmarks we love and expect: auto- portraiture, a filmic approach, her characteristic colour palette, as well as a tension between the witty and the sinister, the conventional and the unorthodox, the glamour and the sleaze.

And we are not disappointed to find that the boundaries between fantasy and reality are blurred. But what elevates The Tourist is the exceptional crafting of the point where we leave our extensional world and enter her intensional one. Roy creates a visual metaphor for a world we believe we know. Yet, through her clever use of juxtaposition, we realise that it is not the world we think it is. The details are meticulously prepared and  set, the scenes are both familiar and alien. The snorkelling mask above a mouth from which a cigarette dangles, the pool boy’s mop casually abandoned near a mock temple; fluffy slippers in close proximity to water are never a good idea, neither are high heels on slippery poolsides.”

On November 13th, a signing session was scheduled with Kourtney Roy at the European Short Film Festival in Brest. Martin Zarka’s documentary will also be screened on November 12, 13 and 14 at 5:30 pm at Passerelle Centre d’art contemporain and at the Ateliers des Capucins. But the second confinement has probably cancelled these, just like any other cultural events in France . It remains this fascinating documentary to watch, and Kourtney Roy’s artist’s book to read