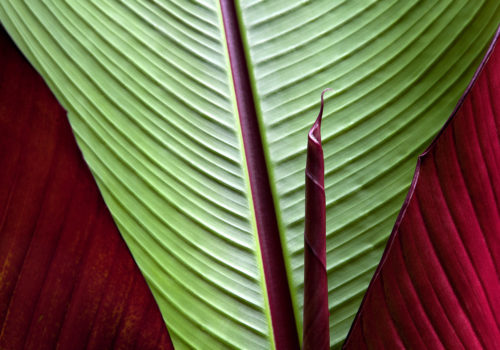 Peter C. Jones’s Jungle Stories, taps into the rhythms of three jungles: The Cultivate Jungle, The Actual Jungle, and the Asphalt Jungle, all found along the Atlantic coasts of Brazil, Rhode Island, and Manhattan. With these three disparate Jungles, Jones has captured the essential elements of the wild and the cultivated, both at the mercy of the unpredictable nature of human behavior.

The Cultivated Jungle consists of his photographs made in a spectacular garden room at John Gwynne and Mikel Folcarelli’s sublime Sakonnet Gardens in coastal Rhode Island. Jones depicts the Actual Jungle in the coastal town of Una in the vast state of Bahia, Brazil. The Asphalt Jungle, derived from quotes collected by the artist during his decades in Manhattan, capture the non-stop pulse of the city of ambition.

Says Gallery owner Kathy McCarver, “One of my favorite aspects of Peter’s Jungle Stories work is the unprecedented luminosity of the plant materials that simultaneously function as precise graphic elements in counterpoint with the tangy, smart and sexy quotes from his Asphalt Jungle.”

Selections From The Asphalt Jungle

She ordered a wellness shot with a Chardonnay chaser.

I am a former hippie with a closet full of Chanel.

You spent the night with Manny? Did you get the Cartier watch?

That ballet was so good, I can’t believe that we saw it in Los Angeles.

Just because I gave it to you doesn’t mean it’s yours.

No wine is as good as Coca-Cola.

I went from nympho to zero.

The Afterword to Jungle Stories by Laura Ruth Bidwell

There is a line, a vein, a pulse that runs through everything. It can be seen through a leaf held up to the sun or just below the surface of the skin.

Thoughts and plants come from where it is moist, hot and humid: Little Compton, where the waters pour forth and Brazil, the color of dark peeling bark and glowing embers.

Sharpness and tenderness exist together.

Remarks become earworms that buzz their way into one’s mind

to reside in the hive of memory. They give new meaning to Romance languages.

The warmth and coldness of the truth remain.

This is the thread of the story. There is nonsense, but there is much sense.

Comments are made in bright light but the meanings echo in the shadows.