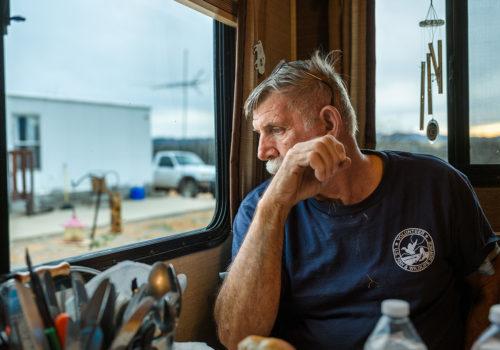 In his first book, Timothy Eastman presents us with portraits of and interviews with people called workampers, people for whom the most promising form of the American Dream is a life lived on the road. Workampers are people who typically live in an RV or van, moving between temporary and seasonal jobs. Often, they are people who had lived a more mainstream life but found themselves barely getting by. Some see themselves as rebels and adventurers who have bucked the system and found a way to live on their own terms. But workamping is also characterized by financial precariousness.
Healthcare is unavailable or unreliable, and safety is a concern, especially for solo travelers. The next job is not guaranteed and most are low-paid. Amazon is the workamper’s largest employer, hiring for help in its warehouses during the busiest times of the year.

From the text by Timothy Eastman:
The idea for this work first came from reading the book Nomadland by Jessica Bruder. She described an America that I didn’t know existed, one composed of travelers. I was fascinated by the emergence of this way of life as something that, if not exactly yet mainstream, seemed to be growing in popularity.
The workampers I photographed and interviewed had a wide variety of attitudes towards their situations. Some painted themselves as rebels and adventurers, people who had bucked the system and found a way to live on their own terms. Some viewed their lifestyle as a pragmatic decision, a way of lessening day-to-day stresses and living expenses. Still others expressed that they had struggled with feelings of shame, wondering if they were experiencing something akin to homelessness. Most were quick to point out the advantages of the lifestyle, citing benefits like a sense of freedom and a liberation from many of the financial and social entanglements that once weighed them down.
A common fear was that I would paint workamper life in a negative light. They cited past media coverage that they felt was unfairly biased.
They complained the public had been given the impression that workamping is a life that one is only forced into by unfortunate circumstances. This question of personal agency was a frequently raised topic of discussion. Most insisted that workamping was a life they had chosen out of opportunity rather than necessity.
I completed the work in this book during a series of trips in 2017–19.
The people featured here come from a wide variety of backgrounds and beliefs. What they have in common is that they let me into their homes and were some of the kindest and most welcoming people I’ve ever met. It was a privilege to be allowed a glimpse into their lives.

Timothy Eastman is a photographer currently living in Brooklyn, NY. He attended School of Visual Arts in New York City where he received an MFA in Photography, Video, and Related Media.

Also on the subject:
The US-American filmdrama Nomadland, based on the 2017 nonfiction
book Nomadland: Surviving America in the Twenty-First Century
by Jessica Bruder, directed by Chloé Zhao and starring Frances McDormand, won three Academy Awards in 2021.