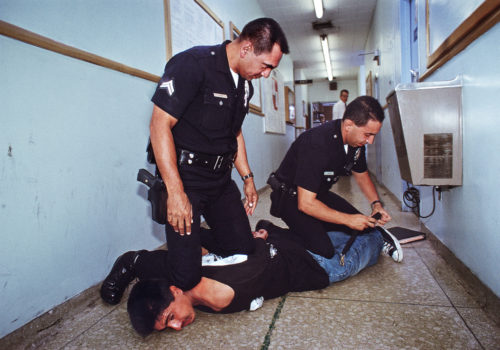 In a year when millions of Americans poured into the streets demanding changes in police strategy, training and deployment, the Bronx Documentary Center (BDC) believes a crucial part of the conversation should be Joseph Rodríguez’s photo series and just-released book, LAPD 1994.

The BDC’s online exhibition with images and text from Rodríguez’s book gives us an up-close and personal look at the cops, victims, and violent perpetrators in working-class communities of Pico Union, Rampart, and South Central Los Angeles.

Though the photos were taken more than 25 years ago, they serve as markers illuminating the path to our current society, one beset by debates about policing, violence and incarceration. As Rubén Martínez writes in its introduction, Rodríguez’s body of work visually encompasses, “another moment that tore open the soul of America.”

In the mid-nineties, the LAPD was in search of a public image makeover after the Rodney King uprisings. As part of these efforts, the LAPD gave photographer Joseph Rodríguez unprecedented access to document the officers in the field for The New York Times, hoping to give the public an image of a “kinder, gentler cop”, as the headline put it. For weeks, he immersed himself in the daily workings of the 77th Street, Pacific, and Rampart Divisions.

Four years after Rodríguez rode along with Rampart officers, the station became notorious when the biggest scandal in LAPD history erupted in an astonishing spectacle of officer corruption that included the murder of a fellow cop, a bank robbery, unprovoked shootings of alleged gang members, drugs stolen from the evidence room, and other crimes – so much for a nicer, gentler cop.

In 2020, the year of Black Lives Matter, a generation after these photos were taken, new uprisings demand reform yet again, and the same questions about policing – what are they for, who do they serve, and who do they protect – shape the public discussion.

The photos in ‘LAPD 1994’ display the subjectivity of Joseph Rodríguez as much as that of the cops and the civilians, who are the victims and sometimes perpetrators of violence – he is not afraid to humanize the cops, but the images also show the darker side of both the officers and the people they are sworn to protect.

Joseph Rodríguez was born and raised in Brooklyn, New York. He studied photography in the School of Visual Arts and in the Photojournalism and Documentary Photography Program at the International Center of Photography in New York City. His work was published in print and online news organizations like The Guardian, National Geographic, The New York Times Magazine, Stern, and The Washington Post among others. He has received many grants and awards, including several Pictures of the Year by the National Press Photographers Association. He is the author of ‘Spanish Harlem’, as well as East Side Stories: Gang Life in East Los Angeles, Juvenile, Flesh Life Sex in Mexico City, and Still Here: Stories After Katrina. Recent exhibitions include Galerie Bene Taschen, Cologne, Germany; Irene Carlson Gallery of Photography, University of La Verne, California; Third Floor Gallery, Cardiff, Wales, UK; and Moving Walls, Open Society Institute, New York, NY.

In response to concerns around COVID-19 the Bronx Documentary Center has canceled all gallery hours until further notice. This exhibition is open as an online gallery.

Published by The Artist Edition in 2020

The event will be live-streamed via Zoom.