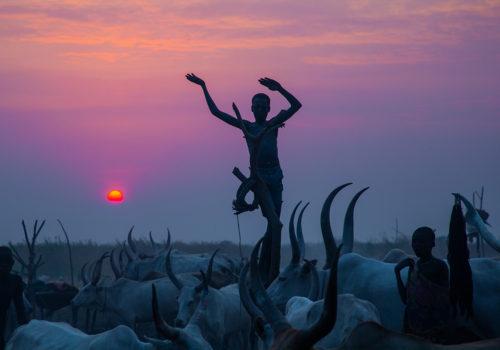 Born in France, Eric Lafforgue started his career in the media, the music industry and mobile applications. In 2006, he started publishing his photos on the Internet via Flickr. They were quickly noticed by magazines around the world. He had started with portraits, but quickly evolved to more social things capturing moments of life. He likes to dig deeper to get beyond appearances.

His work on the tribes of Papua New Guinea was exhibited at the famous festival “VISA Pour l’Image” in Perpignan, France.

Adventurer at heart, he was bitten by the travel bug at the age of ten when he discovered Djibouti, the Horn of Africa, Yemen and Ethiopia… and he still spends most of his time traveling the world, to share his most beautiful encounters with the eyes of an ethnologist and the heart of an artist. He essentially favors regions or populations in danger and often unknown to the public such as Iraq, Afghanistan, Somalia, Angola, or North Korea where he is now banned by the government after 6 stays. With his humanistic approach, Eric Lafforgue offers in his photos and travel stories a positive view of the countries he visits.

A Sony ambassador, Eric Lafforgue is also a member of the Hans Lucas studio since September 2016.

Your first photographic trigger ?
Eric Lafforgue : Djibouti 1973. An Afar shepherd and his camel, with my father’s Minolta. From a distance, because he scared me with his long traditional knife!

The man of images who inspires you ?
Eric Lafforgue : I had no photographic culture before I got into the business, because I entered it by chance, so I would give the name of one of the only photographers I was following at the time: Depardon, because of the common destinations we had (Eritrea, Ethiopia…). Knowing the places we photographed, I think he is one of the few to be faithful to reality.

The picture you would have liked to make ?
Eric Lafforgue : A picture of Mathieu Paley showing a Chinese woman who put her money in her stockings, in a train I think. Perfect.

Which one moved you the most ?
Eric Lafforgue : Not one but a series of Salgado in Ethiopia, during the great famine of the 80s. It took a lot of courage to bring back such pictures.

And the one that made you angry?
Eric Lafforgue : A photo showing Kurds coming out of days spent in cellars, in underwear to show that they were not armed, towards Mossul I think. Why add shame to pain when we know the modesty of these dear people …

If you had to choose only one image among yours, what would it be ?
Eric Lafforgue : Without doubt Miss Kim, from North Korea. For the story behind this picture (a North Korean guide who speaks perfect French and praises the merits of North Korean education when in fact she spent her entire childhood in Algeria in a French-speaking school with a diplomat father!)

A key image in your personal pantheon?
Eric Lafforgue : At home: the first series I sold, on Papua New Guinea, to Geo Germany. A series on the Highlands that was used to illustrate a story on… Asmats. As if you were illustrating life in Corsica with pictures of Bigouden people from Brittany…

Among others: the cover of an old Nat Geo magazine from the 90’s with a masked Iranian woman. I wanted to go and see this region (Hormozgan) without imagining that I would still find such outfits in everyday life.

What is the necessary quality to be a good photographer ?
Eric Lafforgue : Open the good eye! And by the way, don’t try to redo what has already been done because chances are it won’t be as good…

The secret of the perfect image, if it exists?
Eric Lafforgue : The one whose flaws you look for because you are too proud not to have taken it!

An essential photo book ?
Eric Lafforgue : All Peter Beard, even if it is beyond pure photography, I know I know!

The camera of your beginnings ?
Eric Lafforgue : Hasselblad hd 40. That I tried in Vanuatu in off-road conditions that it didn’t not at all like, and that earned me long exchanges with the service department! I was stupid enough to think that a high end camera would take better pictures… Go take pictures with a medium format in the dark and humid jungle without a tripod…

Which one do you use today ?
Eric Lafforgue : Canon Mark IV. It makes a little noise like a toy but in the end it’s the best compromiser all occasions with reliability and quality.

Your favorite drug ?
Eric Lafforgue : My Bose headphones, my best way to cut myself off from the world and to escape.

The best way to disconnect for you ?
Eric Lafforgue : At one time, to go to North Korea where phones were confiscated on arrival until I was banned.

Your greatest quality ?
Eric Lafforgue : To do what I said I would do, and not always talk about what I do like too many people on social networks!

An image to illustrate a new banknote ?
Eric Lafforgue : The Swiss who invented and gave up the rights of the hydroalcoholic gel. We owe him that much!

Your greatest extravagance as a photographer?
Eric Lafforgue : Having formatted by mistake a 256 gigas card from a rare tribal ceremony in Ethiopia… And having started my portraits at 1,2 with the 85mm canon. In the end it gave a very personal touch!

What do you want to share through your images ?
Eric Lafforgue : More than what I show, I want to share more and more what people tell me on the field.  Go beyond the images.

The city, the country or the culture you dream of discovering?
Eric Lafforgue : Pakistan should be done when the embassy’s website doesn’t send back Error 404 when you have to “send” your visa application!

The place you never get tired of?
Eric Lafforgue : Asmara in Eritrea. The country does not have good press for good reasons but it is a cultural and architectural gem.

Your biggest regret ?
Eric Lafforgue : Not to have visited countries such as Mali, Niger etc when they were still safe.

Facebook, Instagram, Tik Tok or Snapchat?
Eric Lafforgue : Instagram but their algorithme also bores me. If I didn’t get commercial benefits from this site, I would stop posting. I don’t have an addiction to these networks.

Color or B&W?
Eric Lafforgue : Color with the Hasselblad, B&W with the Leica M6 and the triX 400!

Daylight or artificial light ?
Eric Lafforgue : I tried to use flash but I have no patience with machines and settings and I quickly gave up. Taking pictures only in natural light, even if it’s weak, remains a more exciting challenge.

If God existed, would you ask him to pose for you, or would you opt for a selfie with him?
Eric Lafforgue: Because he doesn’t exist! A selfie, with a wide angle, to show off in hell!

Which image do you think represents the current state of the world?
Eric Lafforgue : This image seen in The Guardian: a beach in Sri Lanka that I visited 20 years ago, immaculate, now filled with plastic and various waste.

What is missing in today’s world?
Eric Lafforgue: In the world of photography, to tell the truth more often rather than embellish and deceive in the end.

What if everything had to be redone?
Eric Lafforgue: I wouldn’t forget to put a film in my Leica M6 the first time I used it in Yemen!