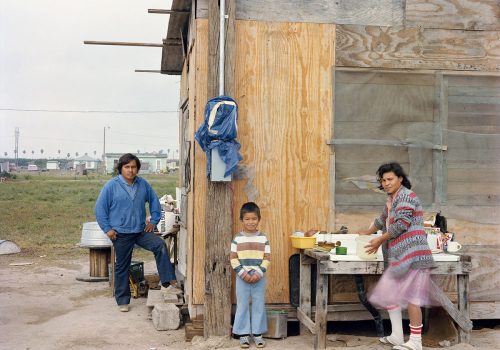 First published in 1987 to widespread critical acclaim, American Prospects has come to be regarded as an enduring classic as relevant to societal conditions now as it was four decades ago. In particular the role of the seasons and of natural disasters seen in its pages presages great threats to the earth we now witness.

This revised edition permits a deeper look into the surprising ways that Joel Sternfeld’s delicate, pastel hued images presented a deep mediation on the America in the 1970’s and ‘80’s that managed to be simultaneously funny and despairing, calmly beautiful and grim.

American Prospects has been likened to Walker Evans’ American Photographs and to Robert Franks The Americans in it’s ability to visually summarize the zeitgeist -and to influence the course of photographic representation following its publication.

This definitive edition contains sixteen new images which have neither been seen or published before. Sternfeld includes more portraits which elucidate the human moment in America in those years. These penetrating pictures anticipate his second national survey Stranger Passing published thirteen years after American Prospects.

“Though climate change was not so pressing an issue during the time he made American Prospects, its threat is present in the photographs, as they bear witness to the devouring mechanisms of industry that began to dominate. And this is what the photographs do: not lead us to quick conclusions, but bear witness, standing as testimony of a world whose changes will, eventually, swallow it up. Sternfeld’s work captured the beginnings of it, and he asks us-then and now-to notice that the world is ablaze behind us, while we stand in the foreground, buying pumpkins. “ — Alice Zoo

A major figure in the photography world, Joel Sternfeld was born in New York City in 1944. He has received numerous awards including two Guggenheim fellowships, a Prix de Rome and the Citibank Photography Award. Sternfeld’s books published by Steidl include American Prospects (2003), Sweet Earth (2006), Oxbow Archive (2008), First Pictures (2012), Landscape as Longing (2016) with Frank Gohlke, Our Loss (2019) and Rome after Rome (2019).