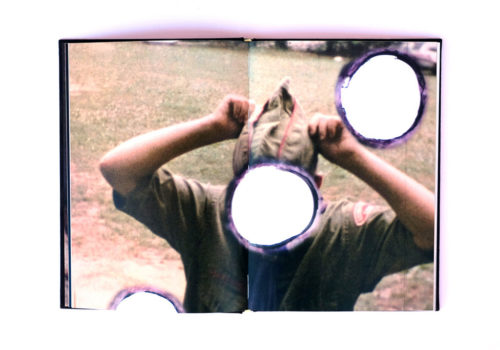 In The Last Son, Jim Goldberg, born in 1953, talks about his complicated childhood being the youngest son, born long after his older siblings and confronted with a depressed and chronically ill father. The 1968 race riots and battles between the Black Panthers and elite units of police haunted him through middle school. He describes daily confrontations at the family dining table, during which his parents made him feel like he was the last son, in all senses of the term. All this caused him to run away in a somewhat hesitant manner. At eighteen, he left the house and began to practice photography. In 1973, he took a photography workshop in Boston and, according to his own words, photographed everyone and everything. He then describes, focusing on periods about one-month long, his stays in the Northwestern United States, Philadelphia, and California. His story concludes at the end of February 1975.

The book retraces Jim Goldberg’s development as an artist. Playing with family photos and hand-written notes from his past, he explores, for himself and for the reader, his transformation into an artist. Mixing photographs, photograms printed from family film, collages, typed and hand-written texts, he draws on his archives to construct a story starting from his very first shots.

The book, conceived by Goldberg and magnificently edited by Super Labo, lets one appreciate the process through which the author gives a sense of his approach by exploring new narrative forms and possible combinations between text and image. As he stated while receiving the 2007 Henri Cartier-Bresson Award (for his project The New Europeans): “I have the privilege to be the witness and the narrator at the same time. Intimacy, trust, and intuition guide my work.”

Irène Attinger is in charge of the library and bookshop of the Maison Européenne de la Photographie, in Paris.

In the Collection of Cnap : Jim Goldberg