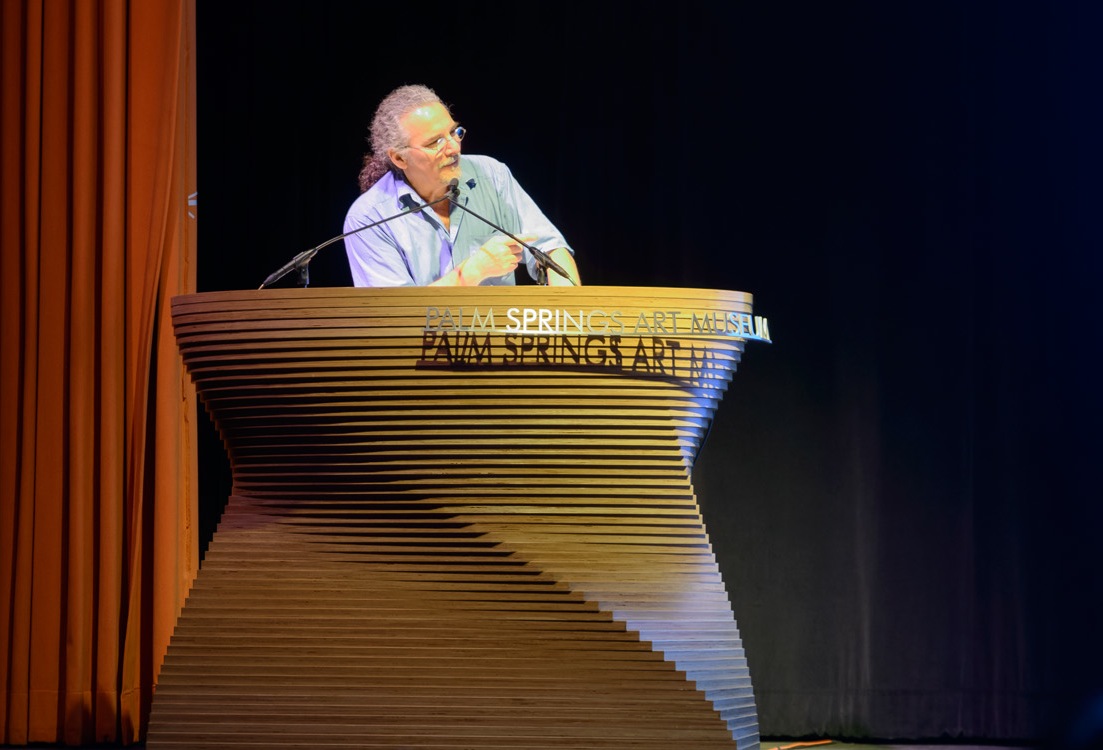 I’m talking with Jeff Dunas, founder of the Palm Springs Photo Festival. We met a few weeks before the festival to talk about this year’s gathering and I thought I’d take the opportunity to find out about how PSPF came to be. Jeff is an easy talker, filled with enthusiasm for what has become a significant landmark in the photographic calendar, a gathering place for hundreds of photographers concerned with taking the next step in their careers and recharging their spirits. Held in Palm Springs with headquarters at the Korakia Pensione, PSPF is the place where photographers, curators, editors and teachers mingle for four days while enjoying seminars, portfolio reviews, classes and chance meetings. I go there to see what’s happening in the photographer’s world and for the chance meetings and hard won knowledge that informs many of the presentations.

JD – It’s the most depressing day of the year for me. I go from having a hundred guests, the most amazing exciting people around, and suddenly it’s over and there’s no one there and it’s like it didn’t happen.

AR – And yet you come back next year to do it again, why?

JD – Oh man, that’s what my wife keeps asking me (laughs). Y’know, probably the real answer is “because I can”, I know that sounds ridiculous but I’ve found the way to be the facilitator somehow, to bring so many incredible people together in one place, so a kind of a summit happens and then I step back and get out of the way and what happens next is amazing.

What I’ve done in my career has brought me into contact with book publishers and magazine publishers and advertisers, museums and galleries and such that I was in a position that I could reach out to these people and invite them to this event. I don’t know where I got the temerity to do that but I did and they came so the first year we had maybe sixty attendees and a faculty of twenty. Now we have a faculty of a hundred. We probably had fifteen volunteers to do the first event, now we have over a hundred. To see that many people come together and to see the fun they have and how they interact is wonderful.

AR – so there was a time before all this, a time when you did other things. And then one day something changed. What made you do this?

JD – You know, you often back into things in life. You don’t have a hundred percent clear picture of your end game when you launch something, because most people wouldn’t launch anything if they knew how much trouble it was going to be. I had attended the Arles Festival of Photography founded by Lucien Clergue for many years and I came to realize what I liked best was the interaction among people of like mind and interests and in a setting where you’re really relaxed, where people are running around in their shorts and sandals and it’s not like you’re meeting them in their offices in NY where you’ve got fifteen minutes and everybody is under pressure. And I thought to myself, why doesn’t this happen in America, there doesn’t seem to be anything like this and I started to realize it could be done.

Korakia, where the festival was born is a kind of Greek Moroccan hotel that’s like a little village. I knew the owner and I started talking to him saying “This would be a great place for a photography gathering, a festival, and he got so tired of hearing me talk about it over the years that around 2005 he finally said “Just do it! I’ll give you the hotel mid-week, try it and see what happens”. So at that point I had the opportunity to do it.

I didn’t want to look for sponsors; I wasn’t going to alert the press but at that time I had a partner named Hossein Farmani who had a list of photographers. So Hossein sent out emails and I invited some people I thought would be interesting to teach the workshops (I think there were four then, there are eighteen now) and people showed up. We had no idea what was going to happen. After it was over Hossein returned to his primary interests but I thought the results were magical, I got so many people saying “ This was the most amazing four days I’ve ever had” that I thought “this needs to happen”. So I went to see Canon and said “Here’s this idea” and the Canon guys said “Let’s do it” so then I had a sponsor and an event and I just had to do it.