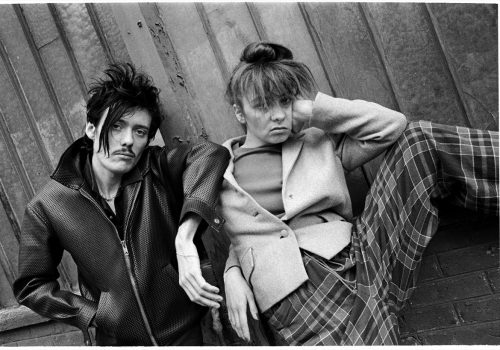 First monographic exhibition through Jeanluc Buro’s lens, a selection of photographs
taken in the 1980’s, focusing on places that have become mythical of the Paris nightlife, the movements of the French and international alternative scene and its emblematic artists. This presentation reveals almost all of the original visuals that emerged from negatives that had remained untapped until now.

His rendering of analogic Black and White is inspired by cinema and humanist photography.
Jeanluc Buro attended the evening classes of IDHEC (Institut des Hautes Etudes Cinématographiques) given by the famous photo director Henri Alekan (from Cocteau’s film “La Belle et la Bête” to Wim Wenders film “Wings of Desire”) who introduced him to the science of light. Jean Dieuzaide (founding member of the Rencontres de la Photographie d’Arles) taught him the art of black and white printing.

After a period as studio assistant, he devoted his first years as a photographer to fix the memory and face of the Parisian underground scene.

His objective leads us into the proximity of backstages – after the hysterical concert of the Cramps at Bobino, and that of The Cure at the Olympia. We share some intimate moments with Bauhaus, Taxi Girl and other “Jeunes gens mödernes” at Rose Bonbon nightclub.

This inspiration for nightlife and the movements of counter-culture is also accompanied by a spontaneous curiosity that leads him to skim innovative places or to attend the most surprising events. During this period, Jeanluc Buro worked as a photojournalist for the generalist and musical press of the time: Best, Rock’n Folk, Libération, Actuel, Jardin des modes, and various Fanzines…

This exhibition also pays tribute to the duo Rita Mitsouko, founded in 1979, who will be celebrating their 40th anniversary this year. Jeanluc Buro met them at the beginning of their careers, he made an important series of portraits, on stage, in private, “receiving a pie in the face” during a concert at the Boule Noire in Pigalle or posing for a remake inspired by Brassai and Doisneau.