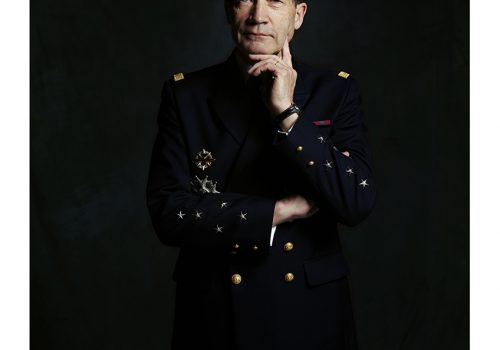 Marine is simply the portrait of a sailor.

We see him there in winter dress.

He spent his working life under  sea level.

Of course, we immediately think of Captain Nemo.

When we look at him everything is beautiful: the look, the decision on his face but also the serenity, control.

The look of one who all his life expects to receive the order to press the fatal red button.

On this portrait we can see very well that he is listening to the world and especially the underwater world.

More than the sailor who travels the seas, he is in perfect communion with the very interior of the seas and oceans.

That’s why to design this portrait the sounds of this world come out of the picture.

Details of sounds produced by mammals, details of gear noise.

Now the Commander has become a 5 stars Admiral 5, he gently withdraws from the sand on the beach but miraculously his passage does not fade.

Portrait of a cloud

The realization of this portrait is the result of an association of memories.

A childhood photograph, taken at Parc Fenestre, in the spa town of La Bourboule, where I hold in my hands a small plane made of poplar and gauze covered with cellulosic products. My friend is holding a blue ribbon JEP boat number 1.

The blue ribbon was awarded to the fastest gear, both transatlantic and locomotives, such as the steamer Normandie, record between Le Havre and New York, but also the locomotive S2 / 6 of the Royal Bavarian Railways, which kept his blue ribbon for 29 years, with his record of 154km / h average.

At the Bourboule, early in the morning we received various and varied care: baths, showers, humors, pallet and sieve, all kinds of sprays. This care ended with a trip to the big cloud.

We entered a room through an airlock after crossing many  white sedan chair I thought I had sighted strange creatures through the glass of a little bull’s eye.

The image was still present when, having crossed the airlock, I entered the big cloud.

It was sweet, big, fluffy. I could not see my feet or my hands, I was floating, I was sure I had flown away.

Little by little I began to glimpse fuzzy shapes slipping into space; then disappeared before reappearing. I perceived weak sounds, listening attentively, sounds became voices, and then a song. The voices of the children filled the cloud with their reflections, their joy, and also their melancholy.

A little song came near me me and then went out.

I wanted this portrait to be protected inside a box covered with Formica, which gives it a 1950s look.

The box contains an exact replica of my 1952 plane, as well as prints depicting clouds (not a beautiful cloud photograph, but only photographs of raw cloud material that can be likened to that of the cloud made in the spa of my childhood) taken from the pieces of clouds photographed on the flanks of Annapurna.

In 2017, I went back to La Bourboule where I recorded the voices of children in the same cloud as that of my childhood.

The plane allowed me in my waking dreams to go with it, to enter and  fly over unexplored landscapes.

The closing and reopening of the box emphasizes the inner life of the box, and makes us feel all that it contains.

Portrait of the wind

You all know the Bièvres camera market.

I have always refused to go there, for many years, by snobbery, by pride considering myself  a “real” photographer and not a lover of old copper appliances to put on marble dressers.

One day my assistants convince me to accompany them:

I decide to go, I was hanging out under the trees, and on the grass sellers present hundreds of objects on plastic cloths or folding tables. I spoted a leather box with a curious shape to accommodate a camera. I openned it and discovered a beautiful object between a turbine and a stopwatch.

What is it ? An anemometer Richard! It’s to measure and record the wind speed, I buy it right away.

I bring it back to my workshop, the return is not warm:

But where to go for it? Cape Horn of course! How to get there ? It is necessary to convince the admiralty to take me to the spot.

Fortunately I have friends in the house because I realized for the Navy, a reportage aboard a submarine atomic launcher, and they liked the reportage.

I tell them of my desire to chase the wind, and they liked it.

In parallel, I advance on the conception and the realization of this portrait.

I went into an old instrument shop, Place des Vosges in Paris, a charming lady greeted me and I asked her if she knew of instruments that, without human intervention, allow to play sounds. She did, the Aeolian harps. She has already seen two! Recently ? No, twice in her life!

It’s a cold shower, still a great idea but impossible …

Fortunately, she knows that some people are still passionate about these instruments and tells me where to look for them.

After a search, I find a Belgian and a French men, who still make  Aeolian harps.

I called the French man, teacher in a college and leave with my assistant to meet him in the Bay of Somme.

Seduced by my project, he agrees to make me five instruments of different sizes and sounds. We will test these harps under the arch of La Défense, where there is often a small wind. The test is conclusive.

At the same time I make sketches of the packaging: a  travel trunk.

I embark with my assistant aboard the Helicopter Carrier “Joan of Arc”. The trip lasted six weeks, from Rio de Janeiro to Valparaiso, via Cape Horn.

Commotion when we arrived because the boats are not used to having civilians. Cumbersome and certainly a little crazy, with boxes filled with glass test tubes and corks, and funny luggage two meters long, protecting curious things. But everything got better little by little during the trip and good friendships remain.

Now let’s talk about my approach during the trip. I moved on the boat and chose a place to capture the wind.

The process was as follows: I took an empty glass tube in my hand and presented it to the wind, at the same time I approached a wind-powered harp near the mouth of the test tube. I recorded with a Nagra the sound of the Aeolian harp produced by the wind at the moment it entered the glass tube, and at the same time we took with the sextant or the GPS, the exact point where we had taken the sounds and winds of the ocean.

At night I traced the wind route and listed my sound points on a map, using the rule of Admiral Gras. Sixty-two points, sounds and specimens were recorded, and preserved.

The trunk contains, in its second drawer, sixty-two numbered specimens, closed with a cork and sealed with gold threads given to me by my friend François Lesage, a great embroiderer, for this purpose. He disappeared shortly after.

In a first drawer, we discover the anemometer, a leaflet telling the adventure, with drawings in pen and pencil. Under this leaflet, there is a print of an image of Cape Horn, platinum print. A magnifying glass allows to make a small trip in the grain of this print

In the third drawer, the eight cards where I traced the wind route.

Then appears in a screen located in the trunk lid, an electronic card retranscribing my trip. The touch screen allows you to move from point to point, and also to hear, by pressing the desired point, the sound of the wind emitted by the Aeolian harp, recorded at this precise location. You can zoom in and out of the map.

This gives a perfect idea of ​​the extent of this sound journey.

Three keys are on the touch screen below the map. The first one allows to see the map of the trip but in 3D, the second and third allow to listen to a small symphony made with the sixty-two recorded sounds, with or without the map visible on the screen.

Finally, the fourth and last drawer allows us to activate the screen, and the sound of the trunk.

And it’s all this trunk that contains the portrait of the wind.