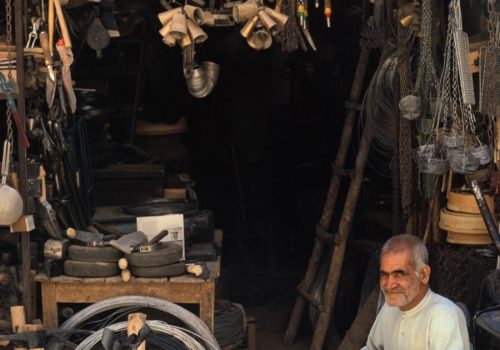 I went to Iran in 1971 to work on a book of the 2500th celebration of the formation of the Persian Empire.

It was instant culture shock. I had never experienced heat (like this) before. On a less that 110°F day I saw a security guy sitting at his desk with a heater to mitigate the cold.

Security was unbelievably tight. Everybody had to wear photo ID. That included people like Haile Selassie and Ferdinand Marcos. You get the idea. People with machine guns every few feet. The Shah was in power at the time and I was supposed to photograph him (no photographers used the expression “shoot someone” the entire time I was there).

I passed the assignment to Burt Glinn because he was better dressed than I was and had brought a tuxedo along. I am always the worst dressed person in the room so they were relieved not to have me visible to VIPs.

The celebration itself took three or four days as I remember it. Then we went off to other places to “shoot Iran”.

I was arrested the first day of the trip because of lack of proper ID. I showed the police my photo ID for the “2500thCelebration of the Founding of the Persian Dynasty”. He said that was yesterday. “Today you need new ID.”

Contrary to most of my trips that ended up with me photographing mostly people, in Iran, I was amazed at the architecture, the interiors, and the landscape, as well.

It was an overwhelming trip. A kaleidoscopic journey that I still count as one of my favorite experiences.

I am saddened by what has happened since then, but I feel that it will inevitably change as all political relationships do.

If you want to see more images on this subject and many others, go to www.jaymaisel.com