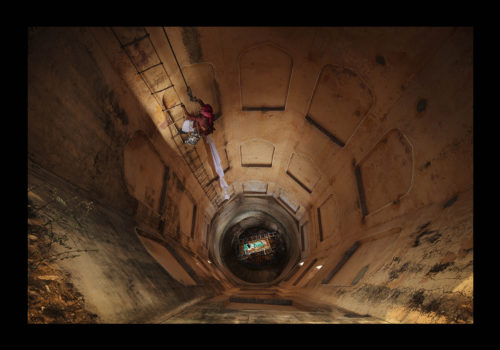 The Institute of Islamic Cultures and Nicolas Henry present on the Saint-Ange Bridge, the series The Adventures of Supershaktimaan, in partnership with the town halls of the 10th and 18th arrondissements, the department of cultural affairs and the history committee of the City of Paris.

From February 7 to May 8, 2022, passers-by on Pont Saint-Ange are invited to discover the initiatory journey of the Hindu hero Supershaktimaan, who fell madly in love with a young Muslim woman named Shamina.

This tale inspired by Indian mythology unfolds in a series of fifty unique compositions, in which the couple fights a common enemy, the “shopping Monster”, which condemns the planet to an ecological disaster. From the bustle of Jaipur to their refuge in Fez, Supershaktimaan and Shamina heal the wounds of humanity in a captivating ode to religious tolerance and environmental preservation.

The exhibition is activated during storytelling tours, a round table with the artist on his commitment to the preservation of the environment, or even a concert combining traditional Indian music and beat box.

Nicolas Henry is a graduate of the Beaux-Arts de Paris and the National School of Art of Paris-Cergy. Following production work for the project Six billion others by Yann Arthus-Bertrand, he embarked full-time on his photographic work. His book, Imaginary Tales Around the World – World’s in the Making at Éditions Albin Michel, received the Mediterranean Art Book Prize 2017. In 2021, he founded Photoclimat, the first social and environmental Biennale in Paris.

As part of the development project for the Barbès-Stalingrad urban promenade, in addition to road improvement works, lighting and pedestrian circulation, several new urban uses have been devised: approval research of social and solidarity economy in Stalingrad, agricultural project on the bridge spanning the tracks of the Gare de l’Est, bicycle space in the chapel, market counter in Barbès, artistic proposals as part of the Beautify Paris project….

Thus, on the Saint-Ange bridge, which spans the tracks of the Gare du Nord and opens the view beyond Paris, is installed an exhibition space made up of about fifty “spaces”, within which are programmed contemporary creation projects, in particular photography, or projects retracing the history, identity and personality of the districts across the promenade: Barbès, the Goutte d’Or, the Chapel, Stalingrad. Since the 19th century, these districts, linked by the elevated train, have welcomed people from all over the world, their cultures, their hopes, their energy.

The space unfolds on the north and south railings, because it is also about inviting Parisians to “come over”.

The Institute of Islamic Cultures

Cultural establishment of the City of Paris located in the Goutte d’Or district, the ICI promotes the diversity of Islamic cultures and their dynamism in contemporary creation by offering exhibitions, concerts, conferences, screenings- debates and workshops, as well as offers dedicated to young audiences.

From Africa to Asia via Europe and the Middle East, the cultures of Islam are multiple and inspire artists, whatever their origins, ties, beliefs or nationality. Through their eyes, the ICI challenges prejudices and presents the events of these cultures all over the world.

The ICI also offers language courses and artistic practices, as well as themed tours of the Goutte d’Or district.

All activities are spread over two buildings, each of which has exhibition spaces and classrooms. The rue Léon site also has a patio, an open-air stage and a restaurant (La Table Ouverte) while there is a hammam in the building located on rue Stephenson. A prayer room, managed by a religious association, occupies the first floor of this building, in an unprecedented configuration that respects the law of 1905.