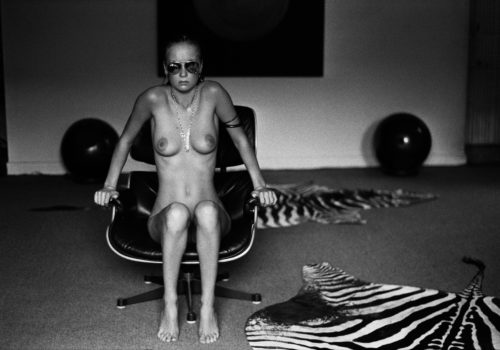 This article was first published on February 17, 2012.

Tomorrow, February 18, a retrospective of the work of Alice Springs, June Newton in the real life, will open at the Gallerie Carla Sozzani. June was a talented photographer, who more or less retired fifteen years ago. Speaking to us about June are three of her closest friends: José Alvarez, director of the publishing house Les Éditions du Regard; Dave, the legendary art restorer; and Philippe Garner, director of Christie’s photo department.

Speaking of the photographer Alice Springs, Helmut Newton said: “I sense truth and simplicity in her portraits.” Truth and simplicity. One would be hard-pressed to describe her talent more succinctly, and her photographs, taken across more than three decades, bear witness to this statement’s accuracy.

We recognize a great artist from her own personal form, which is often evident even in her earliest works. This is why we consider Alice Springs an accomplished artist. Her portraits are immediately identifiable by the power of their clarity, even though they have few distinguishing features apart from an admirable mastery of light that reveals the essence of each image.

Let us try to decrypt them, to seize on their singularity. Each viewer will certainly respond according to his or her own personal sensibilities, to an article of clothing or some detail in the environment, or the feeling that an image instills in us.
That feeling is nothing less than the key to Alice Springs’ work. Because that is one of her great talents—she was also an excellent actress— she had the ability to reveal each of her subjects in all their intimacy, turning them also into actors . She photographs individuals, in all their singularity. By tactfully effacing herself, she engages in a respectful dialogue with her subject. Then she waits for the event to occur, a laugh, a sigh, a furtive glance… the shutter snaps.

In general, the settings are mundane enough to put the subject at ease, as is the natural, calm and unifying light. What Alice Springs offers us is like alchemy: a perfect alliance of look, light and subtle elements of the scenery. The product is a skillfully set game that produces a portrait of self exactly as one would wish to see oneself.

“Some people think that Helmut in some way inhibited, or even put a stop to June’s career. They are deeply mistaken. She chose to step aside to make room for Helmut’s genius.” Dave, the restorant owner we introduced on La Lettre (www.lalettredelaphotographie.com/archives/by_date/2011-02-07/1219/the-polaroids-of-dave-part-one), was a good friend of Newton, whom he met in 1977.

A magnificent exhibition of photographs by Alice Springs, first shown in Berlin, is now presented in Milan. I saw the original exhibition and can assure the citizens of Milan that, thanks to inspirational gallerist Carla Sozzani, they have on their doorstep a not-to-be-missed opportunity to appreciate the singular authority of this photographer’s eye. The exhibition is an object lesson in two key areas of photography – fashion, and portraiture. The first – fashion – was her route into the medium. Her career in this field was kick-started when she once stood in for her husband; he was unwell but there was a commission to be fulfilled; she seized the chance and proved her ability. Her fashion pictures are filled with energy and alive with a sense of fun, the kind of pictures that seem to animate the magazine page with such effortless ease. This is, of course, never as easy as it looks.

But it was in making portraits that Alice Springs truly found her form. Her professional name is an assumed one. Her real name is June. She was an actress who gave up a promising career to support her husband’s extraordinary talent and destiny as a photographer. She worked with him to develop ideas, and came to understand the process of investing one’s very soul in the making of a great picture. June, I find it easier to call her by that name, has always believed that our lives are a privilege and must be lived to the full. She has always pushed hard, dug deep to find and share the very best of herself; and she expects nothing less from others. June has an exceptional ability to create energy fields around her within which life takes on a very special flavour, richer, more intense, and more sharply focused.

June has always been fascinated by human nature, and by the way people behave and express themselves. Her pictures explore the ways different personalities project their individuality, and how those blessed with them manage the gifts of creativity, imagination or good looks. This is the stuff of her portrait work – the penetrating, fearless confrontation with the many individuals who have intrigued or impressed her. June strips the picture-making process to its bare essentials. There is no fancy technique; more often than not there is only the most simple of settings, nothing to distract from the person depicted. Her skill is in connecting with her subjects, in stripping away mask or artifice, in presenting these people in all the force of their humanity. As with her fashion work, this is never as straightforward to achieve as it may appear.