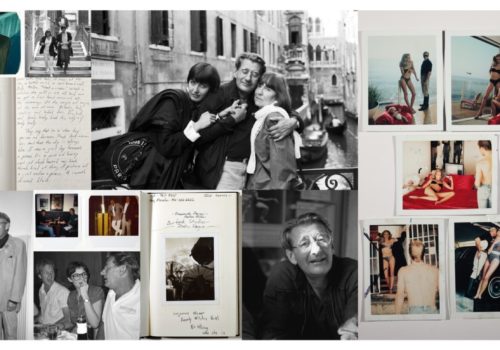 This article was first published on January 9, 2011

Even though titled The 3 Boys from Pasadena, the exhibition at Clic Gallery in New York is about 5 people, 5 very special people. Back in 1979, Mark Arbeit, George Holz and Just Loomis while students at the Art Center College of Design in Pasadena, California hiked to Los Angeles Beverly Hills Hotel to meet with Helmut Newton. Eventually, the 3 became his assistants and had with Helmut and his wife June a friendship spanning over 30 years. To this day, Helmut gone, June keeps a close and nurturing look on the 3 which even after all these years remain The Boys, the Lady wrote the introduction to the book “Mark Arbeit Work” and edited the book by Just Loomis “As We Are”.
In June 2010, “Three Boys from Pasadena”, curated by June Newton, premiered at the Helmut Newton Foundation in Berlin. The exhibit consists of each photographer’s individual work, as well as several memorabilia panels, consisting of never-before-seen snapshots, handwritten notes, journal pages, contact sheets, and other souvenirs of their time with Helmut.
In the world of photography, there are few photographers if any which have spawned “inspired homage’s”, to put it nicely, than Helmut Newton. While it has been said that imitation is the sincerest form of flattery, it is quite wonderful and refreshing that Arbeit, Holz and Loomis became as June puts it “photographers in their own right”. Breaking away from the obvious, all three give us images where we can feel Helmut presence but not through the iconic imagery of stiletto heels, leather and corsets. What we can feel is the often overlooked sensibility of Helmut, as if being close to him and June all three understood what really mattered beyond the smoke and mirrors. Just like when June takes the camera as Alice Springs, Helmut is here and in Helmut’s images June is present, in the work of the 3 Boys they both are.
The exhibition and the accompanying book are truly “A Tribute to Helmut Newton” but it is also a fascinating look at five very special artists, a united family which managed to keep their individual creative spirits.
As for the story, nobody else than June Newton can tell it better. So here it goes, once upon a time…

“”The boys told me in 1979 they camped outside our bedroom at the Beverly Hills Hotel. They said I opened the door, saw them, slammed it shut and said to Helmut “They’re still here!” Helmut opened the door, advised them to leave but to return in the morning of the following day. I think they reminded Helmut of his youth when he used to go down into the garage of the building that Muncasi lived in to hide and watch him unload his cameras. Helmut and the boys became good friends. They assisted him on many occasions, and they were the only three assistants who worked with him and became photographers in their own right. They complement one another and all had a unique relationship with Helmut, they’ve become his offspring—each with their own voice. It was a special time in all our lives —all four of them and I was the witness. It will never come again. It was fitting that I invited them for a group show in Helmut’s foundation in Berlin on June 3, 2009. It’s unfair that I am writing this piece instead of Helmut because he would be so proud of them all.” – June Newton, Monte Carlo, 2009