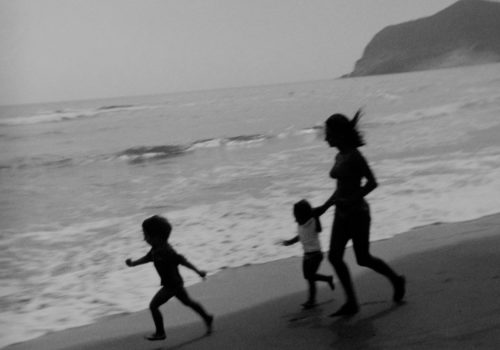 Kyoko and Didier Brousse from Galerie Camera Obscura informed us of the death of Françoise Nuñez, following an illness with a quick ending. They sent us this text  accompanied by these images by her husband, Bernard Plossu.

We first met Françoise at the end of the 90s, in Arles, where we had an appointment to consider an exhibition at the gallery. We were immediately struck by the quality of her work but also by her personality. By the paradox of a talent that was both modest and sure of itself. A straight character that can be read in her vertical frames, clear strokes on the keyboard of time. A great inner mastery in keeping with her recurring interest in “spiritual” martial arts, Aikido, Kalarippayatt, which she practiced and photographed in India and Japan.

Françoise refused seduction: she showed without embellishments or comments. We are free to love or to go our way. Besides, it was us who felt like we were being gauged as she showed us her work. Being Bernard Plossu’s wife also made her cautious and reserved. She must have felt a genuine interest in her work or she would turn on her heels.

We were actually the ones taking the exam.

The meeting was successful… and we prepared our first solo exhibition at the gallery, which took place in the spring of 2000. We have since had the pleasure of representing her work.

A traveling photographer, Françoise left regularly for India, Ethiopia, South America, Japan to return home to La Ciotat to spend long days in her laboratory where she embodied in wonderful prints the dazzles of her journeys. She also put her talent at the service of the work of her husband, Bernard Plossu, for whom she made a good part of the prints.

“I practically only photograph when traveling. And when I leave, I just think about it. I want to be receptive to everything, far from everyday life and places that I know too well. I like the unexpected, the surprise, the emotion of discovery. And  try to make all these emotions felt ”

There is something of the emotional intensity of travel in Françoise Nuñez’s photographs: a state of temporal weightlessness that favors meeting and opening up of feelings, presence in the world. However fleeting they may be, sometimes as if stolen from the corner of the eye in full swing, these photographic visions, immersed in the daily movement of things, transmit a feeling of communion, a love at first glance which would have the correct intuition of ‘a possible relationship of balance between what we see and what we are, between those we meet and ourselves.