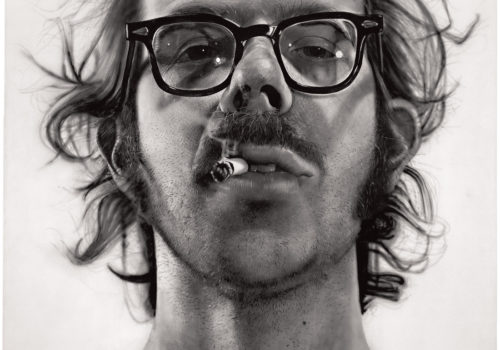 Pace Gallery announced last Thursday the passing of Chuck Close in these words:

“We are saddened to announce that artist Chuck Close passed away earlier today following complications from a long illness resulting in congestive heart failure.⁠ “I am saddened by the loss of one of my dearest friends and greatest artists of our time. His contributions are inextricable from the achievements of 20th- and 21st-century art.””—Arne Glimcher, Chairman, Pace Gallery⁠

Throughout his childhood and adolescence, Close used art as a means of navigating a learning disability. He continued to develop his artistic skills through private art lessons, drawing and painting live models. As a student at the University of Washington (BA, 1962) and later Yale (BFA 1963; MFA 1964), he began to emulate the styles of Arshile Gorky and Willem de Kooning, considering himself a third-wave Abstract Expressionist. As he explored this vocabulary, he pivoted from biomorphic forms to figuration.

After studying at the Akademie der Bildenden Künste in Vienna (1964) on a Fulbright grant, Close returned to the United States in 1965. He taught painting at the University of Massachusetts, Amherst, where he would present his first solo exhibition. Seeking to break from the gestural style that had characterized his student work, Close shifted toward Pop-inflected figuration before embracing the tools of commercial art and illustration. Basing his paintings on photographic images, Close reduced his palette to black-and-white. One of the artist’s most famous works from this period is the large-scale painting Big Nude (1967). His solo presentation at the University of Massachusetts Art Gallery in 1967 featured paintings of male nudes, a move that proved controversial and resulted in a landmark court case that sought to extend freedom of speech in the visual arts.

Upon relocating to New York, Close continued to explore realism, using an airbrush to paint black-and-white, highly detailed photographic portraits of himself, family, and friends onto large-scale canvases. He participated in his first New York exhibition in 1970 at Bykert Gallery alongside Lynda Benglis and Richard Van Buren. Around this time, the Walker Art Center, Minneapolis, acquired Big Self Portrait (1967) directly from his studio. Close relinquished his black-and-white palette in the early 1970s and began employing a three-color process as well as various imposed systems and techniques. A year later, he opened Recent Work, his first major museum exhibition, at the Los Angeles County Museum of Art.

Exploring different modes of representation, Close began in the late 1970s to make explicit use of a grid system or an irregular grid based on a physical relationship to his support. The resulting works read like pixelated mosaics wherein the viewer blends distinct areas of juxtaposed colors, shapes, lines, and fingerprints, into a unified image. The artist’s first retrospective, titled Close Portraits, was organized by the Walker Art Center, Minneapolis in 1980. That show traveled to the St. Louis Art Museum, Missouri and the Museum of Contemporary Art, Chicago before closing at the Whitney Museum of American Art, New York.

Since suffering a spinal aneurysm in 1988 at the age of 48, Close battled a myriad of health issues. Through rehabilitation, he regained his ability to paint by using a brush-holding device strapped to his wrist and forearm. Beginning in 1991, he continued his explorations of portraiture through the production of silk tapestries. Since 2003, he has furthered this investigation, creating editions of large-scale Jacquard tapestry portraits. In June 2015, he was diagnosed with Frontotemporal Dementia (also known as Frontal Lobe Dementia), which causes brain atrophy that leads to a progressive loss of brain function.

The artist is currently the subject of a solo exhibition co-organized by Pace at Tatintsian Gallery in Moscow, and in 2020 he had solo exhibitions with Pace and White Cube in Hong Kong. Major projects by Close in recent years include the traveling solo exhibition Chuck Close Photographs, which opened at the NSU Art Museum, Fort Lauderdale, Florida in 2016, and the unveiling of his mosaic portraits at the 86th Street station on New York’s Second Avenue subway in 2017.