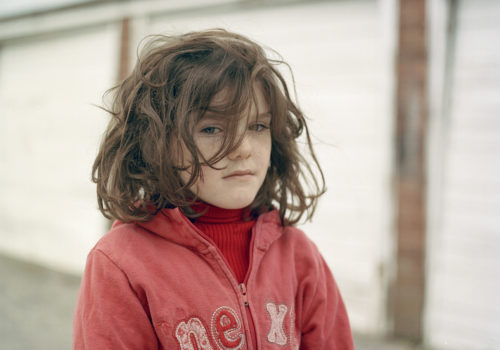 The Exhibition of Laura Pannack is one of the two exhibitions of the ImagesSingulieres 2021 festival in Sète that we have chosen to present to you.

A huge wasteland separates the two cities: “Tibby”, or Tipton, and its cul-de-sac of residential houses which surrounds a small playground, kids forced to stretch their arms above their heads to push a pram, or others tumbling down on bicycles.

Via a narrow alley you reach the wasteland, a stretch of grass bordered by blackberries and nettles. Motorcycles, scooters and quads roar, every day and at all hours, in a deafening din. The kids race to the point of burning their machines, perfecting the art of riding on one wheel. Usually the horses, which are equally popular, are kept behind the gardens, or in the nearby stables. The girls huddle around small fires despite the scorching summer sun.

On the adjacent land we arrive at the “Lost City Estate”. Most of the guys hang out there in front of Jack Barrett’s gates, a metal fence stuck at the entrance of the field. On their perches they tell each other stories, lit cigarettes and joints, giving each other the affectionate nickname “Mush”. What attracts me to this place is its island community. Everyone knows each other. The inhabitants, feeling forgotten, chose the name “The Lost City” themselves. With little entertainment or inspiration, with no role models to follow, these young people do feel lost. The police are fighting them. My goal is to explore the friendships, the spoken language and a unique tradition unique to this region and its people.

Laura Pannack is a London-based photographer. Known for her portraits and social documentary series, she explores the complex relationship that exists between the photographer and her subject. Her work has been the subject of numerous exhibitions and publications around the world, including at the National Portrait Gallery, the Palace of Westminster, Somerset House and the Royal Festival Hall in London. Her work has been widely recognized and awarded with numerous awards, including the John Kobal Award, the Vic Odden prize, the World Press Photo Awards and finally the HSBC Prize for Photography.