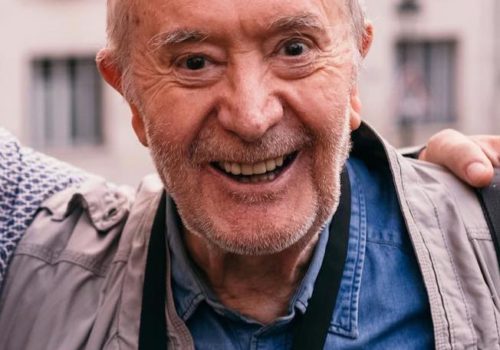 Collaborator of Jean-Philippe Charbonnier, reporter for Réalités magazine, Niepce 1962 award, distributed by the Dalmas photo agency then Rapho and today by Gamma-Rapho agency, Jean-Louis Swiners left us between two parties scoffing at life he loved so much.

In 1945, Jean-Louis Swiners’ father gave him a “Vest Pocket Kodak 4 1/2 x 6 dating from 1928” and he began with self-portraits. He started a professional career as a photographer in 1957 and in September of that year, he had a scoop: the Russian nuclear center of Dubna, which was published on the front page of France-Soir and distributed worldwide by the agency Dalmas. This exploit enabled him “to accept an unpaid position as Jean-Philippe Charbonnier’s suitcase carrier” which led him to the journal Réalités for which he made numerous reportages until the mid-1960s. which earned him the name of “humanist photographer”. He then left photography for advertising and would not return to his first love until the end of his life.

In November 2015, tormented by the desire to show his work again, he contacted me. I met him at his home in Suresnes in an incredible bric-a-brac dotted with hundreds of prints. I had in front of me an apparently an old man who was in in fact an incredible Zebulon (Tigger) who harassed me with questions on the state of the profession today! I am totally disoriented by the energy that emerges from the guy and that he used on his Facebook page until his last days. We quickly discovered a common friendship for the photojournalist Jean Lattès. Jean-Louis then entrusted me with this text “which they wrote together”.

It is impossible to tell this gentleman ” rests in peace”, because there is no doubt that where he is, he still wiggles with intelligence and fantasy.

This could be the start of any article devoted to Jean-Louis Swiners; but he is not being prosecuted for the intelligent exercise of photography (at least, not yet) and a legitimate curiosity prompts us to question it further.

We are in the “factory-office-workshop-studio” of the above-mentioned. Behind him, the wall, entirely covered with shelving (made by J.L.S.), lined with hundreds of 30 x 40 boxes. On their edges, we can read Gene (… Smith), Bob Capa (double box), H.C.B. (in French, Henri Cartier-Bresson), Life, Bill Ray, Bill Epridge, Burk Uzzle, Moi-même (sic), D.D.D. (David Douglas Ducan), etc …

In each box sleep (with one eye), reportages, articles, statements, photographs, of these, and many more.

He relies on its rolling tables-prototypes-with basic books (design and manufacture J.L.S.), treatises, manuals, precise, vocabularies, encyclopedias: anything and eveything.

The windows of the room are covered with perforated panels which support the electric panoply of the perfect photographer (cables, clips, lamp holders, multiple sockets, spots, etc.). In short, in this cave, everything testifies to the methodical and ingenious spirit of the tenant, like the “radar-on-wheels”, electronic flash with special indirect reflector, visual crossing between a crane and a helicopter.

At fifteen, cycling was his passion; at sixteen, docimology his little sin: predicting with 75 to 90% success the mathematics or physics questions of the “white exams”  he was given; or do his homework during the lesson, to be able to read quietly. In a word, he annoys his teachers. He still had 20 out of 20 in mathematics for his baccalaureat.

He then prepared Physics and Chemistry of Paris, the Decorative Arts of the rue d’Ulm, finds himself the victim of a recruiting officer is promoted commissioned officer of active and infantry, and, in 1956 reserve officer in Berlin Napoleon district.

The (under) lieutenant Swiners is very busy. He was given all kinds of toys: radioactive cobalt, six large guns, TNT, etc. He learned strategic lessons from the Korean War, discovered the New Zealand method of shooting, and that “the battalion soup is not good “. Which annoys his superiors a little.

Another discovery, photography; he buys a Zeiss-Ikon 6×6 Nettar, then a Rolleiflex, and goes so far as to have to request by the hierarchical route “Mister General commanding the garrison of Berlin” “kindly to grant him the authorization to pass his next permission of fifteen days inside the barracks to practice photography ”. Favorable opinion. He learns that “dust is the photographer’s biggest enemy” (Der Staub ist des Fotographen der Schlimmste Feind) and how to make flawless 50×60 from a 6×6 nega. Mr. Swiners was seized by photography and disembarks in April 1957, after 31 months of service, at the Gare de l’Est with 180 kg of various luggage, in container, including 179 kg of enlargers, books, flashes, development and laboratory.

Now you have to make a living. He rushes into photography, which eludes him.

August arrives; a friend offers him a 15-day trip to Moscow, all expenses paid, for four hundred francs [In 1962. About five hundred euros nowadays] with students from the National Agronomic Institute of Paris, at the 6th Youth Festival and Students for Peace and Friendship. He pretends to be a former student. Everything is fine, until the Soviets ask him to lecture on one of the most difficult subjects: grass. He politely declines this perilous honor, explaining that there was an error, and that it is as a physicist and not an agronomist that he is in the USSR. Just as politely, the Soviets then invite him to visit a lot of atomic centers – including Doubna, with what was then the largest synchrocyclotron in the world – which he photographed almost freely.

Upon his return to Paris, his photographs were published around the world. It gave him money to go hunting for a job.

Finally, a miraculous chance allowed him to start working at Réalités, as assistant to Jean-Philippe Charbonnier. Three months later, he was at Entreprise, magazine of the same group [Hachette]; simultaneously, he takes photos for Réalités; he succeeds in particular a good series on race horses [including the double in color] and Jacques Dumons, then artistic director, deposits in Jean-Louis’ gadget-bag his 1958 Christmas present: an entry to become “staff” at Realities.

He discovered the world, used several passports, saw around fifty countries (including Monaco) and finally realized that he knew neither the others, nor himself.

Despite everything, he won the Niepce Award in 1962.

That year, after inventing a variable density rotary shutter, he discovered Bob Capa and the Cubans. And he realised then, about Cuba, that if his photos are a testimony, the selection of pictures, and the order of presentation, can completely modify the meaning of the reportage. At the same time, he notes that it was impossible for him at the time to justify in a rational and objective manner the intuitive choice he would like to have published.

He discovers that mastering photography requires mastering thought and language. And quoting Paul Valéry: “We think as we collide”, which he does not hesitate to modify: “I only think if I collide”. He devoted an exhibition of photographs, at the Grand Palais in Paris, to a quote from Saint-Paul (Thessalonians, I, V, 23): “… and that your whole being, the spirit, the soul and the body … ”

And, in January 1965, he published his Credo in Jeune Photographie: “I have no conceptions on photography. Photography is a means … Photography is an extension of my mind, one of its extensions in time and space … giving me a vision and an extra-human memory … … I photograph many people, right in the eyes … As I do not like to be considered as game, I do not hunt for pleasure … But to some aesthetic relationships between human forms [allusion to the famous definition of the photography of his friend Henri Cartier-Bresson], I prefer the relationship of these human beings with myself … the best way that I have found to record this relationship between them and me is to photograph their “eyes looking at me “. This is one of the fundamental aspects of photography: an instantaneous and immediate recording, in the sense of an intuitive relationship between the subject and the photographer … It (photography) allows me to show others what I want to show them … “.

In the meantime, he left Realities. He speaks without bitterness of this period: “To organize my ideas, I temporarily stop pressing the button. I studied, a little. If I wanted to defend the idea of ​​adult photography, I had to think about it. I think we need philosophers. Allow me to quote Baruch Spinoza: “Do not laugh, do not cry, do not be indignant, but understand”. And, if you believe friend Plato, it helps to forgive [allusion to “To understand everything is to forgive everything”. But it is not from Plato. Nobody’s perfect]. ”