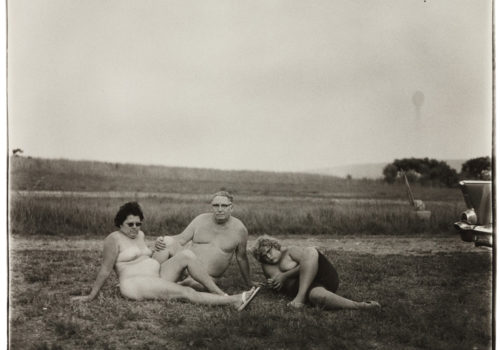 A few days ago, the Holden Luntz Gallery published a very nice tribute to Diane Arbus. Here it is.

Diane Arbus’s unapologetic, intimate, and candid pictures of persons considered to be living on the margins of society pushed and ultimately helped broaden social and artistic sensibilities in the America of the 1950s to 1970s. In the 1950s, American artists were creating images of post-WWII affluence with an exterior of conformism, prosperity, and abundance. Still, Arbus’s aesthetic was the opposite of this. In our modern era, it’s not surprising she’s considered by many to be one of the most original and influential pioneers of photography as a salient and pivotal character in the medium’s history.
“(Arbus’s) work has had such an influence on other photographers that it is already hard to remember how original it was.” – Art Critic, Robert Hughes, Time Magazine 1972

As an American woman in the 20th century, Diane Arbus represents the inquisitive spirit of the artist, ever yearning to find a more profound sense of life in the world. Subsequently, Arbus became the  creative radical who inspired many generations. In her relatively short career, a little over a decade, she was capable of creating rich human connections by portraying the unadorned sitter and hypnotizing the viewer, transcending all sorts of social traditions and decorum. Working with a diverse group of people and through bizarre compositions and jarring appearances, Arbus found a thread of human dignity in every one of her subjects. With a resonant sense of empathy and curiosity, Diane Arbus’s photographs explore the depths of the human psyche and present an aesthetic that, since her time and to this day, provide a unique and intimate way of seeing the strange beauty in the world.
“… There are things which nobody would see unless I photographed them.” – Diane Arbus.

Diane Nemerov was born in New York City in 1923. She grew up in Central Park West and came from a wealthy family who immigrated to New York City and owned Russek’s, a popular Fifth Avenue Department store. She was educated at a prep school in New York, and because of her family’s wealth and social status, she would not feel the effects of the Great Depression, something she expressed thoughts on and which lingered in her conscience.
“One of the things I felt I suffered from as a kid was I never felt adversity. I was confirmed in a sense of unreality which I could only feel as unreality. And the sense of being immune was, ludicrous as it seems, a painful one. It was as if I didn’t inherit my own kingdom for a long time. The world seemed to me to belong to the world. I could learn things, but they never seemed to be my own experience.” – Diane Arbus.

An Introduction to Photography

At the age of 18, Diane would marry Allen Arbus, her childhood sweetheart. Allen had given Diane her first camera during their honeymoon, beginning her independent journey with photography. The couple started a commercial photography advertising business in Manhattan, where Diane acted as art director and Allan as the photographer. They had success with the company and shot for fashion magazines like Glamour, Vogue, Harper’s Bazaar, and others. However, the pair were not “fans” of the fashion world. During this venture between art and commerce, Diane would begin studying under musician turned photographer Lisette Model in 1956, whose up close, disconcerting portraits influenced Arbus’s artistic vision of what was possible in photography. That same year, she quit the business and began concentrating on her photographic work.
“Another thing is a photograph has to be specific… It was my teacher, Lisette Model, who finally made it clear to me that the more specific you are, the more general it’ll be. You really have to face that thing. And there are certain evasions, certain nicenesses that I think you have to get out of.” – Diane Arbus
“There are always two things that happen. One is recognition, and the other is that it’s totally peculiar. But there’s some sense in which I always identify with them.” Diane Arbus

In a post-war world where traditional portraiture had most often presented sitters in a flattering light, Diane Arbus’s work would change the playing field. Working with a 35mm camera, she walked the streets of New York City, creating an aesthetic and a portfolio that would alter the history of photography. Arbus’s embracing of the less fortunate, of the mentally challenged, the socially outcast, or the summarily peculiar provided her work with a certain human characteristic that struck a nerve in the world of photography. Diane Arbus’s pictures were disarmingly honest; they tended to cause empathy or extreme curiosity from characters which were often avoided in society. To a certain point, her pictures allowed viewers to look indiscriminately and meet those who were relegated from society while ultimately bonding on a human level.
In the 1960s, Diane Arbus traveled to nudist camps and captured pictures that presented these enclaves of alternative lifestyles to a wider 1960s American public.
“Nudist camps were a terrific subject for me. I’ve been to three of them over a period of years. The first time I went was in 1963 when I stayed a whole week, and that was really thrilling. It was the seediest camp, and for that reason, for some reason, it was also the most terrific. It was really falling apart.” – Diane Arbus.
The nudist family in the 1960s was in many ways similar to any American family. Still, this image is engaging and memorable precisely because of the nudity. Unspoken rules of photography and morality were broken time and time again by Arbus.
“Arbus’s photographs penetrate the psyche with all the force of a personal encounter and, in doing so, transform the way we see the world and the people in it.” – John Szarkowski, Director, Dept. of Photography, MoMA.

A significant reason that Arbus’s photographs are both insightful and unforgettable is that they appear as honest statements. She was compassionate to those on the edge of society and related to them in human terms. Her pictures were never meant to be exploitative or reactionary. They simply were what they were. Everyone she photographed was making their way through life. She took her own life at the age of only 48, unable to make peace with herself – but she is remembered as a photographer who unflinchingly tried to present those who society forgot or marginalized. Through her viewfinder, she gave an incredible weight and vitality to the world of photographic portraiture.