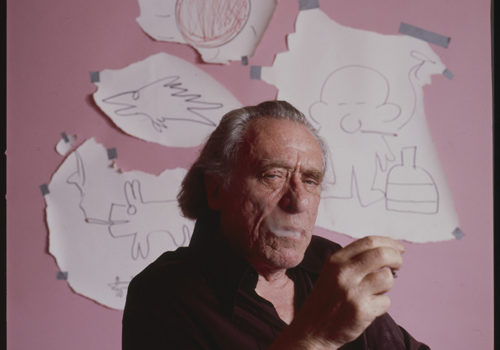 Bukowski broke literary molds. By the early 1940s, when he started on his literary path as a poet and a novelist, the American literature of Hemingway, Fitzgerald, John Steinbeck, Walt Whitman, Robert Frost or William Carlos Williams was still linked to a literary tradition, and if there is anything that marks Bukowski’s main departure from the acknowledged big boys, it is that he wanted to speak with a fresh and unaffected voice. His writing was iconoclastic and his place in my own life was that he showed me the way to break my own molds as well. This story about meeting and photographing him in 1985 is in some ways also a tale about this crude, smart and dirty old man teaching me to burst out and do my own photography, after cracking, maybe smashing at least some of the accepted molds.

By 1985, when I was assigned to photograph Charles Bukowski in San Pedro, California, I had been making photographs professionally since 1970, but in lots of ways, with regards to editorial photography, I was still a rank beginner. Even though I had already published the books Figments, Cleveland Infra Red and Lives I’ve Never Lived: A Portrait of Minor White, and had made portraits of artists like Imogen Cunningham, Jim Dine, James Baldwin, William Burroughs, Laurie Anderson and Cindy Sherman, among others, this was my first editorial assignment from the prestigious German publication Frankfurter Allgemeine Zeitung Magazin. As I boarded the plane for California from New York, where I had moved the past October from Cleveland, Ohio, I thought I knew what I was doing, but clearly I knew next to nothing.

This book came out on what would have been the 100th birthday of Charles Bukowski, 16 August, 2020.  He was born in Aldernach, Germany in 1920 and spend most of his working life in the Los Angeles area of California. And as they say,  “The rest is history.”

Latest articles of the category "Memories"