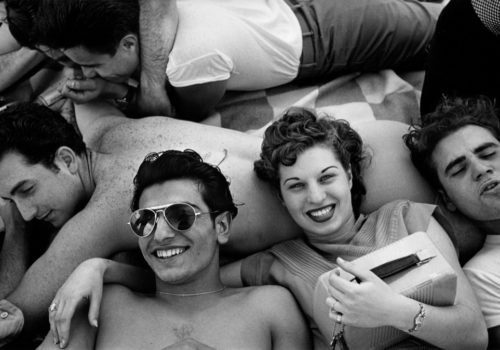 Galerie Thierry Bigaignon is presenting, for the first time in Europe, an exceptional retrospective of the photographic work of Harold Feinstein, born in New York in 1931 who passed away in June of 2015.

Born in 1931 from Jewish immigrant parents, Harold Feinstein began photographing in 1946, at the age of fifteen, when borrowing his neighbor’s Rolleiflex. Sure that he wanted to be an artist, he quit school when he was sixteen. Starting the following year, he was next to Sid Grossman , the youngest member of the Photo League.

Harold Feinstein is also famous for being the youngest photographer to have been included in the Museum of Modern Art (MoMA) of New York’s permanent collection when Edward Steichen acquired one of his photographs in 1950 for the museum of which he was the curator.

Rising figure of New York, avant-garde  street photography, his first major exhibition was in 1954 for a collective exhibition at the Whitney Museum of American Art. He would have his first solo exhibition the following year at Limelight Gallery, one of the first galleries entirely dedicated to photography.

Since then, his photographs have been the subject of multiple exhibitions and are now part of prestigious private  and permanent collections of major American museums, such as the Museum of Modern Art, the International Center of Photography, the Museum of Photographic Arts, the New York City Museum, the Jewish Museum, and a dozen more institutions. Currently, two documentaries on his life and work are in process and should be aired in 2017.

In 1952, Harold Feinstein was enlisted in the infantry to serve in Korea. Though at first disappointed to not have been enlisted as a photographer, he quickly realized the chance that was being given to him; instead of covering the awarding of medals and other official ceremonies, he was going to be able to take his camera everywhere with him and offer an intimate look into the daily lives of the young conscripts, from training camps to the front lines while passing local villages.  He did try to capture the humanity of all the beings who crossed his path and feature the beauty and spirit of camaraderie that escape from this tragedy that is war.

On his return from Korea, he established himself at the legendary “Jazz Loft” in New York, where he met the painter David Young,the musicians Hall Overton and Dick Carey, and, above all, photographer W. Eugene Smith, with whom he would actively collaborate on the maquette of the famous Pittsburg Project.

Eugene Smith would say of Harold Feinstein, “He is one of the rare photographers whom I knew or who influenced me to be capable of revealing, through a superbly new angle with such force and honesty, what, for me, revealed the ordinary.” After many photographic contributions to the jazz label Blue Note Records, he decided to quit the “Jazz Loft”, at 821 Sixth Avenue in 1957, when his first son, Robin, was born, in order to find a home more adapted to family life.

Harold Feinstein would also become a renown professor, sharing, from a very young age until his last years, his inextinguishable passion for photography, notably within the framework of workshops that would become legendary. A true legend for several generations of photographers, he received his first teaching grant at the age of 29 from the Annenberg School of Communications. He also had teaching positions, particularly at the Maryland Art Institute, the Philadelphia Museum School,the New York School of Visual Arts, the Windham College, and the College of the Holy Cross.

A worthy representative of the “New York School of Photography”, Harold Feinstein’s works stretched over close to six decades, a period during which he would strive to make an intimate portrait of an America exuberant and full of energy. Coney Island was his preferred territory, and he took a mischievous look on the life of his natal New York. However, if his pictures after the war painting seaside festivities are his most famous, his photos of nudes, still lifes, and the Korean War are a testimony to his great sensibility. His most recent book, Harold Feinstein: A Retrospective (Nazraeli, 2012), received a PDN Photo Annual award for best photography book in 2013.

In addition to his work in black and white, the artist dedicated more than a decade to color photography, both digital and analog. Harold Feinstein started exploring color in the middle of the 1980s, taking 35mm photos of flowers and seashells with the sky as background. This became a vast corpus of images taken in Cibachrome or by color transfer. Images from this collection were published in LIFE magazine and many other publications. Additionally, He was the pioneer of using a kaleidoscopic lens, producing a portfolio of abstract representations of New York architecture, titled Metropolis, published by LIFE magazine and exhibited at the Municipal Art Society of New York. He was inspired for this series by Louis Kahn and Frank Lloyd Wright who asked Feinstein to photograph their work. Also in color, he produced an extensive photographic essay of the small-scale sculptures of Rodin, whose work he had admired his entire life.

In 1998, Feinstein lead the way as one of the first photographers to use a scanner as a camera (a technique, henceforth, called scanography). His first book of photos using this technique, One Hundred Flowers (2000), is already in its third edition and was followed by six other digital color, large-format photo books published by Little, Brown and Company. This work earned him the Computerworld Smithsonian Award as a pioneer of digital photography in 2000.

At the age of eighty, he received the Living Legend Award from the Griffin Museum of Photography. Keeping outside the darkroom for close to twelve years, he finally returned a short while before his death in 2015, giving us a few recent prints of unpublished images.