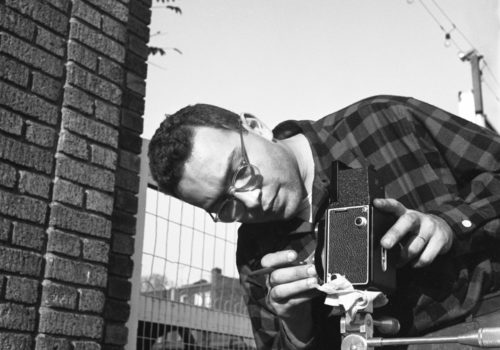 Harold Feinstein, master photographer and renowned teacher, died in his home on Saturday, June 20, 2015. His wife Judith Thompson was at his side.

Feinstein was born in Coney Island Hospital in 1931 of Jewish immigrant parents. He began photographing in 1946 at the age of 15 by borrowing a Rolleiflex from a neighbor and heading straight to Coney Island. Certain of his calling as an artist, he dropped out of school at the age of 16 and became the youngest member of New York’s historic Photo League in 1949.

By the time he was 19, Edward Steichen, an early supporter, had purchased his work for the permanent collection of the Museum of Modern Art making him the youngest photographer to be so honored.

The first important opportunity to show his work came in 1954 as part of a group show at The Whitney Museum and was followed by a group show at the Museum of Modern Art and solo shows at the George Eastman House (1957) and the legendary Limelight Gallery (1958).

When he was just 27, Jacob Deschin, the photo writer for The New York Time’s wrote:  “Feinstein’s work is the new pictorialism, the refinement of the craft as a technically perfected language, not as an end in itself…but as the eloquent vehicle of an individual’s need to say something worthwhile in pictures.”  (November 2, 1958)

In a review of his one man show at the International Center for Photography in 1990, A.D. Coleman wrote:  “Here is New York small camera school at it’s best; humanistic, engaging, almost intrusive…this is the work of a man who loves people, takes unalloyed pleasure in seeing them enjoy themselves, likes to get close to them – and, by rendering their physicality in tactile, nuanced prints, enmeshes the viewer in the sensual, material world his ‘subjects’ occupy.”  A.D. Coleman, New York Observer, October 1, 1990.

Until the turn of the century he was best known for his six-decade love affair with Coney Island.  While his Coney Island work has been much celebrated, Feinstein’s breadth and exposure is far greater. His photographs from the Korean War, taken from the perspective of a draftee (he served two years in the army from 1952-53), offer an intimate look at the daily life of young conscripts and Korean civilians.

In addition, he has a large collection of classic street photography, nudes, portraits and still life. His first black and white monograph, Harold Feinstein: A Retrospective was published to critical acclaim in 2013.

Writing for that book, Howard Greenberg of the Howard Greenberg Gallery said of Feinstein’s work:  “His images, at once joyous and engaging, appear to be made from within the photograph and not from a customary distance. They are alive and allow the viewer a privileged place in his world. All this, while displaying a mastery of light, composition, the moment; elements which make good photographs, great. Feinstein occupies a high ground in the pantheon of street photography.”

Throughout his life, Feinstein was known as an innovator and iconoclast.  Philip Prodger, Curator of Photography at the National Portrait Gallery in London, who wrote the Introduction to Feinstein’s Retrospective, described Feinstein this way:  “Legendary educator, part artist, part guru, part force of nature… Feinstein never sat too comfortably in the photographic establishment. His iconoclasm, individuality, and creative mischief meant that his most original contributions occurred outside easily defined circles of influence.”

Evidence of this iconoclastic strain is evident in a number of bodies of his work. Known as a master darkroom printer, Feinstein loved making photomontages at a time when manipulation of images in the darkroom was frowned upon.  In the late 80’s, Feinstein put a prism on the lens of his camera and took photographs of the streets of New York. The resulting series of abstracts, Metropolis, opened at New York City’s Municipal Art Society in 1995 and was later published in LIFE magazine. According to New York Magazine (September 4, 1995)   “The abstract prisms of shadow and light bring to mind Georgia O’Keefe’s paintings of New York cityscapes.”
His greatest innovation was to come in 1999 when he embraced digital photography, resulting in the publication of seven color books by Little Brown. Beginning with his acclaimed One Hundred Flowers, the books feature highly detailed portraits of nature’s wonders including flowers, fruits, vegetables, seashells and butterflies. He pioneered the use of his scanner as camera, which allowed for both front lighting and a very shallow depth of field. For this innovation he received the Smithsonian Computerworld Award in 2001.
In addition to his reputation as an artist, Feinstein, who had taken one class from Photo League founder, Sid Grossman, was a renowned teacher.  He left New York before he was thirty to accept a teaching fellowship at the newly opened Annenberg School of Communication. He taught continually from his studio and in residence at The Maryland Art Institute, The Philadelphia Museum School, and The School of Visual Arts, among other institutions.  Photocritic  A.D. Coleman calls him “one of a small handful of master teachers whose legendary private workshops…proved instrumental in shaping the vision of hundreds of aspiring photographers”.   He had never graduated from high school.

In recent years, his earlier black and white work has been reintroduced to the public with exhibits that include a major retrospective in Moscow at the Lumiere Brothers Center for Photography,  two-person show with the posthumous photography phenomenon Vivian Maier at the Lumiere Gallery in Atlanta, and his current exhibition Harold Feinstein: Master Photographer that will be up through August at Lumiere Atlanta.  Up-coming shows include the Leica Gallery Los Angeles in September 2015, the Leica Gallery Sao Paolo next February, Blue Sky/Oregon Center for the Photographic Arts in Portland in August 2016, and an exhibit at Panopticon Gallery in Boston (date to be announced in 2016).   Two documentaries about his life and work are currently in progress.  In 2011 he received the Living Legend Award from the Griffin Museum for Photography.

He had a profound appreciation for the preciousness of each moment and encouraged all who knew him to say “yes” to the beauty of everyday life.  His best-known expression “when your mouth drops open, click the shutter” defines the sense of awe that he found in the smallest details of life.  “I myself have always found that the details of life itself – a face, light coming through a window, the beginning of a day, an apple — takes all of my attention. I could never finish exploring and describing the extraordinary of what we call the ordinary of life itself.”

Feinstein lived in Merrimac, MA.  He is survived by his wife, Judith Thompson and his son, Gjon Feinstein, who lives in Santa Cruz, CA.  Those wishing to support his legacy may make contributions to The Harold Feinstein Photography Trust for the purposes of completing the documentary about his life. Information can be found on at http://www.haroldfeinstein.com.  Others may wish to make tax-deductible contributions to The American Photography Archive Group (APAG) a resource organization for individuals who own or manage a privately held photography archive. http://www.apag.us