Greece according to Platon 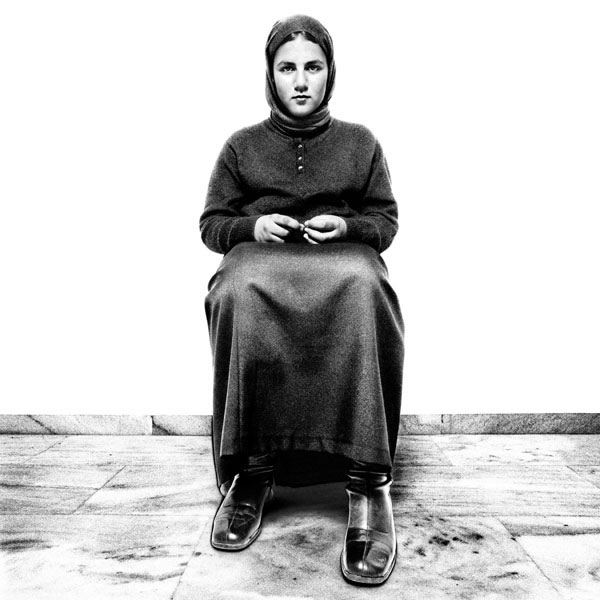 For the past ten years, the New York photographer Platon has photographed the world’s economic and political leaders for the most prestigious magazines. Greece is a personal work, a return to his native country. “These are pictures from my homeland, the Greek islands; the people I grew up with and the earthy spirit that informs my life.”

Greece is a sublime return to the memories and sensory impressions that marked his childhood. The sacred and the profane of Greek life come together to forge a modern mythology: the ex-voto occupy the same place as the magnificent lines on faces, a sun-dried squid, clothing ravaged by the salt and wind, stone walls, teen idols, a wicker stool.

Anyone who has lived in Greece will be overwhelmed by the Hellenic impressions conjured by these photographs. Platon’s black-and-white pictures vary between the tragic and the sacred, engraving the traces of the Greek spirit, the power of its authenticity and the mythical pride of being Greek. Zhto h Ellada. Long live Greece.

Born in London in 1968, Platon was raised in the Greek Isles until his family returned to England in the 1970’s. He attended St. Martin’s School of Art and after receiving his BA with honors in Graphic Design, went on to receive an MA in Photography and Fine Art at the Royal College of Art. After working for British Vogue for several years, he was invited to NY to work for the late John Kennedy Jr. and his political magazine, ‘George’.

After shooting portraits for a range of international publications including the Rolling Stone, the New York Times Magazine, Vanity Fair, Esquire, GQ and the Sunday Times Magazine, Platon developed a special relationship with Time magazine, producing over 20 covers. In 2007 Platon photographed Russian Premier Vladimir Putin for Time Magazine’s Person Of The Year Cover. This image was awarded 1st prize at the World Press Photo Contest.

In 2008 he signed a multi-year contract with the New Yorker. As the staff photographer, he has produced a series of large-scale photo essays, two of which won ASME Awards in 2009 and 2010. Platon’s New Yorker portfolios have focused on many themes including President Obama’s Inauguration, the U.S Military, portraits of world leaders and the Civil Rights Movement.

The following year, Platon teamed up with the Human Rights Watch to help them celebrate those who fight for equality and justice in countries suppressed by political forces. These projects have highlighted human rights defenders from Burma as well as the leaders of the Egyptian revolution. Following his coverage of Burma, Platon photographed Aung San Suu Kyi for the cover of Time – days after her release from house arrest.

Platon’s first monograph Platon’s Republic, was published in 2004 by Phaidon Press. To coincide with its publication, the work was exhibited internationally, in London at the ex-Saatchi Gallery as well as the Milk Gallery in New York.

His second book, ‘Power’ – a collection of portraits of over 100 world leaders – was published in 2011 by Chronicle and following its success was selected by Apple to be released as an app. The book includes portraits of Barack Obama, Mahmoud Ahmedinejad, Dmitry Medvedev, Benjamin Netanyahu, Hugo Chavez, Mahmoud Abbas, Tony Blair, Robert Mugabe, Silvio Berlusconi, and Muammar Qaddafi.
In recent years, public speaking has progressively played a major role in Platon’s career as communicator and storyteller. He has been invited to be a keynote speaker at the World Economic Forum in Davos, Yale, the London School of Economics, the National Portrait Gallery in London and the International Center of Photography in NY. He has also appeared on a range of television media including Charlie Rose (PBS), Morning Joe (MSNBC), Fareed Zakaria’s GPS (CNN) and the BBC World News.

In 2011, his work was exhibited in New York at the Matthew Marks Gallery and the Howard Greenberg Gallery. The New York Historical Society also exhibited a solo show of Platon’s Civil Rights photographs which remain as part of the museum’s permanent collection.