Gordon Parks : The Atmosphere of Crime, 1957 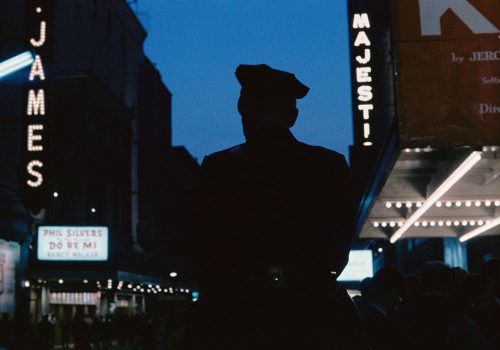 When Life magazine asked Gordon Parks to illustrate a recurring series of articles on crime in the United States in 1957, he embarked on a six-week journey that took him and a reporter to the streets of New York, Chicago, San Francisco, and Los Angeles. Unlike much of his prior work as staff photographer at the magazine, the images were made in color using only available light. The resulting eight-page photo-essay “The Atmosphere of Crime” was noteworthy for its bold aesthetic and sophistication, and how it challenged pervasive stereotypes about criminality in mainstream media. The photographs provided a richly-hued, cinematic portrayal of a largely hidden world of violence, police work, and incarceration, depicted with empathy and candor.

Parks rejected clichés of delinquency, drug use, and corruption, instead opting for a more nuanced view of the social and economic factors tied to criminal behavior. The Atmosphere of Crime, 1957 transcends the romanticized gangster film, the suspense of the crime caper, and the racially biased depictions of criminality then prevalent in American popular culture to provide a rare window into the working lives of those charged with preventing and prosecuting criminals. Parks used his camera to do what it does best: record reality so vividly and compellingly so Life’s readers understand the complexity of these chronically oversimplified situations.

Featuring an expansive selection of never-before-published photographs from Parks’ original reportage, The Atmosphere of Crime, 1957 is published on the occasion of the forthcoming collection installation at The Museum of Modern Art, Gordon Parks and The Atmosphere of Crime, which will include selections from the museum’s recent acquisition of 56 photographs from the series.

Gordon Parks, one of the greatest photographers of the twentieth century, was a humanitarian with a deep commitment to social justice. He left behind an exceptional body of work that documents American life and culture from the early 1940s into the 2000s, with a focus on race relations, poverty, civil rights, and urban life. Parks was also a distinguished composer, author, and the first African American filmmaker to helm a studio film. His celebrated artistic work includes photographs taken for the Farm Security Administration (FSA), the Office of War Information (OWI), Life, Glamour, and Ebony, as well as his literary work, including the novel The Learning Tree, which he adapted, directed, and scored as a film, and his direction of the feature film Shaft (1971). Parks’ work is held in the permanent collections of major museums across the United States.

Gordon Parks: The Atmosphere of Crime, 1957