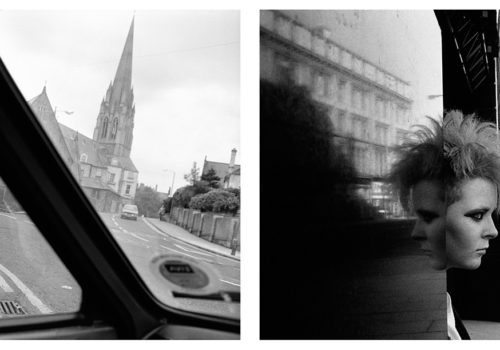 The Closeness of Place – Text by Donovan Wylie

Growing up in Belfast in the 1970s, many photographers visited to photograph “The Troubles”. I remember sitting in my school class, and sure enough every few weeks a photojournalist would turn up and photograph us while we were studying. Northern Ireland became a spectacle for photographers, who often created the set by paying children to throw stones. And then the photographers would leave, never to be seen again. On reflection, it was a form of assault.

But not Gilles. Gilles was always different. He had a criticality, he understood context, and probably most importantly, his life became entwined with this place; he became part of it, and to a degree a victim of it, because he gave himself to it. Gilles brought a perspective, within his own context, that became a gift to the North.

I’ll use a word that will be used a lot, but it’s true: Whatever You Say, Say Nothing overwhelmed me. The box arrived and I was a little intimidated at first, even just opening it. I had to let its presence sit on the floor for a day, then I confronted it and, taking advantage of the Irish spring light, I worked slowly through all three volumes until sunset.

The closeness of “place” – this place, the North of Ireland – and Gilles’s sense and relationship to this place, is like watching a rhythmic modern movie; every element of the sequence feels acute, considered and conceptual. The work has a “thereness” that’s so sincerely real and that goes to the heart of photography, maybe even art; it feels inside of time, and also transcendent of time.

I will need to watch the images again and again to fully appreciate the brilliance of the work, something I will look very much forward to doing. In the same way I always shout about how Chris Killip’s In Flagrante is one of the most modern photography books I know, Whatever You Say, Say Nothing has taken that spot. I have the books sitting on a table, not in the library. It will be a while until they make it to the shelves.

Annals of the North, the text and image volume by Chris Klatell and Gilles that accompanies Whatever You Say, Say Nothing, is probably one of the most analytical art books about the North of Ireland that I’ve encountered. It works as a document, and initially appears to be one, but as you read on you realize it’s designed to confront the very nature of “place” and “history”. In the end it’s a book about the concept of time itself, and sits in that sweet, essential spot between Art and Document.