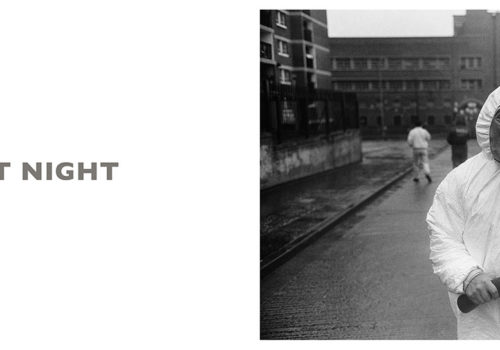 Curiosity about the way people live and their social interactions outside the family – long predating the advent of sociological studies – is sparked in a very natural way by noticing their behaviour. It takes on a wider frame of reference when a group of people become a focus of attention, giving rise in the observer to feelings and attitudes that run the gamut from empathy to hostility. Photographing human behaviour adds another dimension for, while the moment is necessarily unique, what is recorded can also bear witness to a situation that goes beyond temporal singularity and becomes constitutive of social history.

Such considerations lie at the heart of the work in Ireland of Gilles Peress and his tremendous achievement has been justly recognised in The Eye of Photography. He has borne witness to the turmoil of thirty-years of political irresolution in Northern Ireland– known as the Troubles – that produced one of the most lethal periods of violent conflict in Western Europe since the end of World War II.

The pictures that make up the first two volumes of a stupendous publication from Steidl are a documentary record of a complex social history. The ferocious conflict in Northern Ireland was political at its core and it resulted in intensely politicised communities but this took place in a civilian landscape, in cities, towns and countryside where people carried on with the essentials of everyday life. There were no battles of the traditional military kind but riots, protests, bombings and targeted killings produced an average death rate of two people every single week for thirty years (1968-1998). In between, life went on: days when nothing much happened, days when citizens and combatants were busy making other plans.

The striking impact of the two virtually wordless volumes of Whatever You Say, Say Nothing — many hundreds of pages (37.5 x 25.5 cm) of uncaptioned, undated photographs, divided into 22 semi-fictional days – validates what Peress means when he speaks of showing how ‘today is not only today but all the days like today’. The noirish quality of the black and white photography is essential to the way he transforms the metaphysics of Groundhog Day into a dark dystopia resulting from the mismanagement of a British colonial order.

Visual evidence of Ireland’s social history has a venerable heritage, going back to the hundreds of stone circles and dolmens that dot the countryside, built by communities cooperating on projects that were never economic imperatives. The fracture in Northern Ireland’s society has produced its own visuals on the gable walls of houses, in graffiti and the banners and emblems of street parades. They express belief systems and allegiances – ideologies, if you wish – but the photographs in Whatever You Say, Say Nothing point to more than a direction on a political compass and they transcend photojournalism. This comes out by way of a part in the third volume, called Annals of the North by Peress and Chris Klatell (which is also available as a separate publication), that reproduces a secret document from the UK Ministry of Defence in 1979. Written by Whitehall mandarins about the IRA, it shamelessly observes how the illegal force is ‘essentially a working class organization based in the ghetto areas of the cities and in the poorer rural areas.’ Paramilitary resistance to British rule is so unreservedly linked to a social identity that it goes on to state that ‘if members of the middle class and graduates become more deeply involved they have to forfeit their life style’.

The start of the Troubles can be dated to a civil rights march in Derry in 1968, protesting about the shortage of social housing, and the class nature of the conflict that so hardened after the arrival of British troops and internment without trial is writ large in the photographs. Working class people are seen in pubs as well as funerals, at the seaside as well as banging dustbins lids to warn of an army presence. Privately owned cars outside homes are as relatively uncommon as shots of solitary figures – even the deceased are seen in proximity to others and mourning, as much as marrying, becomes an experience that needs to be shared.

Picturing Northern Ireland is perilous when words struggle to pin down its identity. ‘Neither British nor unqualifiedly Irish’, says Chris Klatell, ‘the North floats ambiguously in its own cold sea’. The image is upsettingly appropriate for a geographical and political anomaly brought into being by the partition of Ireland in 1921. The British carved an artificial statelet out of Ulster, truncating the province of Ulster to ensure that what was left would secure a Protestant majority.

When names are proffered in the North, they come freighted with intent; words are weaponized, become dangerous, and could cause real weapons to be pointed at someone’s head. Whatever the origin of the phrase ‘whatever you say, say nothing’, it is bound up with a world of informers, double agents, interrogators, agent provocateurs. Code words, euphemisms, acronyms and abbreviations proliferate.

In a world of sliding signifiers (dizzy heads were dissident republicans while dizzy pigs were farm animals moved back and forth across the border with the Republic by black marketeers in order to collect farming subsidies), words defy the best efforts of pithy graffiti by failing to convey the intricacies of the post-colonial order that is Northern Ireland. The photographs by Peress speak their own language but they need to be looked at with his advice in mind: ‘don’t look for single pictures here. It is the totality that is the message, the piece’. And the totality is infernally messy and ambivalences abound. The loyalist paramilitaries that opposed the IRA also emerged from the proletariat but from a section whose social history prevented its members from seeing any class commonality with those they sought to slaughter. The difficulties that defy any simple analysis come together in the sad tale of Denis Donaldson, a young republican who became a close friend of Peress in the 1980s, that is told in Annals of the North. Donaldson was also a friend to Gerry Adams and Bobby Sands but was revealed later to have been in the pay of British intelligence and a lonely and brutal death awaited him.

Betrayal is an easy word to say but in context, in a given totality, it can unmoor itself. For Peress, the word becomes emblematic of every worthwhile picture of the North of Ireland: always capable of saying more, or less, than meets the eye. Whatever You Say, Say Nothing is full of such pictures.

Whatever You Say, Say Nothing by Gilles Peress is published by Steidl.